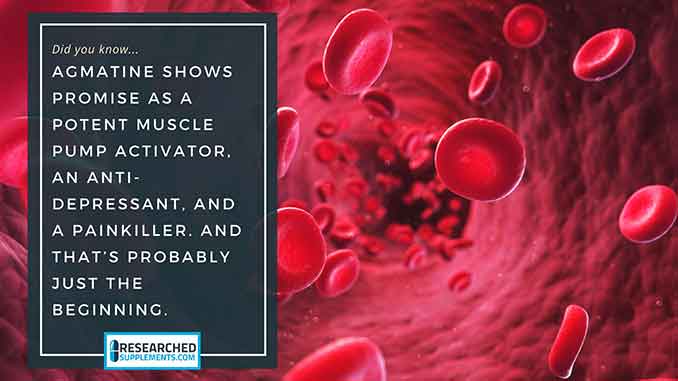 Agmatine is a product of L-Arginine metabolism. Much like Citrulline, it is now being added to pre-workout supplements for its ability to increase blood flow to the muscles.

There is less evidence to support the claims that Agmatine can act as a vasodilator, or muscle pump supplement, but the research on it so far makes us think there is a lot to look forward to.

It might be too early to give a definitive answer about Agmatine’s muscle pump effect from a scientific standpoint, but the empirical evidence seems to support it. Most people using it for bodybuilding purposes report similar feelings to the vasodilation effect of Citrulline Malate.

Other research has highlighted other potentially major applications for it: depression and pain reduction.

Again there isn’t a lot to go on, but what there is is quite remarkable.

We have tested the most popular and best performing pre workout supplements.

Agmatine for Muscle and Performance

Getting pumped up in the gym is not just a figure of speech. There is a literally pumping effect, in which blood enters the working muscles, and is repeatedly allowed to enter and be trapped by the mechanical action of weight lifting repetitions.

The blood vessels – arteries in particular – are obviously the blood’s route in to the muscle tissue. By increasing nitric oxide levels in the blood, the smooth muscle lining the walls of the arteries can be relaxed, thus widening them and allowing greater blood flow.

More blood means more oxygen and more nutrients can make it to the working muscle tissue; the things it needs the most to keep working under load.

For the longest time, Nitric Oxide levels were thought to be most effectively boosted by Arginine.

Arginine has since been proven to be broken down too easily in the body, leaving little of it in left in tact to be of any use by the time it makes it to the blood.

Serum (blood) arginine is still the key to vasodilation, and the all important muscle pump, but there are better ways of increasing serum levels without taking Arginine itself. Citrulline is one of them, and now with almost certainty, is Agmatine.

A scientific study on endothelial cells gives us the indication that Agmatine is going to be a good muscle pump agent.

Supplement manufacturers copped on to this a while back and started adding Agmatine to their pre-workout powders.

The pump doesn’t just make you look good in the mirror, it is a huge benefit in the gym. Muscle endurance and power are both improved, as is post exercise muscle hypertrophy.

For us, a good vasodilator/nitric oxide booster is the key factor in a pre-workout supplement.

Spinal disc injuries and the pain associated with them can be so bad that the people suffering from them can descend into depression. Often, nerve pain lasts for extended periods of time, and there is almost nothing you can do about it.

Perhaps now there is something you can take though.

Agmatine as an Anti-Depressant

This stuff just gets better and better. The single study into Agmatine’s effect on depression resulted in three depressed people going into complete remission.

Why isn’t this common knowledge in the world? Why don’t doctors just hand out cheap tubs of Agmatine to depressed people, instead of all the side-effect-infested drugs? – Answer: massive pharmaceutical companies and money.

Also, there needs to be more than one study into these effects. Robust scientific backing is the only route to widespread success of any product that bites at the heels of clinical strength pharmaceuticals.

How To Use Agmatine

Most pre-workout supplement lovers are probably taking a gram or two of this in their muscle pump matrix, but if you haven’t tried that yet then we recommend it, especially if you have been using a pre-workout with Citrulline Malate, as you’ll be better able to see which one works better for you.

If you’re looking at it from the perspective of someone who has chronic lumbar nerve pain (radiculopathy) and/or depression then you will probably only want the isolated Agmatine powder, which is fine because they are readily accessible in the market as well.

Agmatine is not absorbed well when total protein supplements are taken because it competes with Arginine for the receptor sites, so don’t take the two close together. In any case, the former is usually supplemented prior to working out and the latter as a post-workout.

Pay attention to the dosage guidelines below.

Dosage guidelines are fairly loose on Agmatine because it hasn’t had many studies with humans.

Supplement manufacturers tend to stay around the 500mg to 750mg mark which is more than enough.

We don’t advise going higher than this yet until more is known about the effects of higher dosages taken daily over long periods of time.

This little dude from #gatsupplements is working out for me. If you want to know more about #agmatine and how it can help you with your health and fitness goals, head to the #researchedsupplements website and check it out. Any questions, drop me a line 🤙 . . @gatsupplements #gym #swolemates #musclepump #backpain #arginine #citrulline #supplements #bodybuilding #muscleandhealth #muscleandstrength #pumped #muscleandfitness #health

A post shared by Researched Supplements (@researchedsupplements) on May 26, 2018 at 6:13am PDT

There are no known side effects of agmatine supplementation, however safety data is limited to the small quantity of studies carried out with people so far.

Stay within current recommended dosage limits of around 500mg per day until more information comes to light.

Agmatine is one of the more exciting supplements on the way up in the industry today. There are at least 3 clear benefits to cognitive function, pain reduction and physical performance.

If you suffer from the aforementioned nerve pain due to a disc injury then it might be to your advantage to present the research to your doctor (they are not aware of all things concerned with all aspects of health all the time), and the same goes if you suffer from depression.

Resistance weight training junkies – if not already using it – might want to compare it with their usual pump activator. There is much promise for Agmatine, but whether it’s as good as, or better than, Citrulline Malate is yet to be decided.

Which pre workout are most effective and will give you the best results. We have put the best performers to the test.