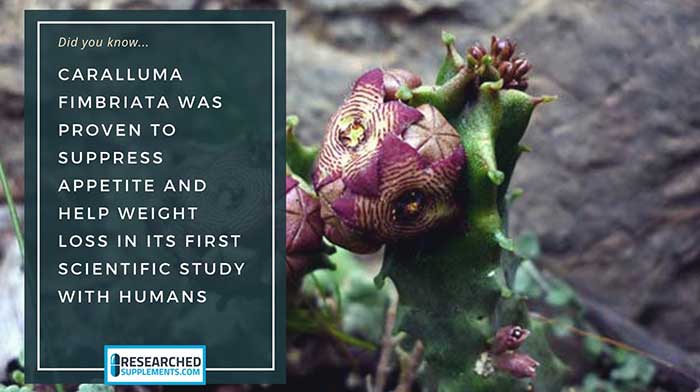 Caralluma Fimbriata is a plant native to India and is currently marketed as an appetite suppressant, due to the results of a single scientific study.

It has been used traditionally as a thirst quencher, a food source and indeed an appetite suppressant.

The scientific study supports the empirical evidence that it is an effective hunger suppressor, but the fact that it is the only such study to have been carried out puts Caralluma Fimbriata in the promising pile, at best, and the questionable pile at worst.

Nonetheless, many supplements don’t prove half the claims that are made about them over the course of several scientific studies, but this one did it in one shot.

The lone study which investigated the plant for its effects on appetite and food intake yielded a positive result and supported the historical use of it as an appetite suppressant.

Weight loss occurred in the subjects over the 2 months of the study, with waist measurements, weight, body mass index and energy intake all supporting the reduction in weight.

Energy intake is probably the most telling factor where appetite suppressants are concerned. If people are eating less compared to placebo then the supplement is the only possible reason.

The study results didn’t quite reach the mathematical significance level required to speak in absolutes but they were trending in all the right directions to make them very promising.

How To Use Caralluma Fimbriata

It’s difficult to nail down the best way to use something when there isn’t much information about it to begin with, so we can really only go with the same rationale as the study.

Caralluma fimbriata should be taken for at least a month before effects start to be noticed.

See the dosage section for details, but the extract needs to be a concentrated one, and not a mere dried powder at 1:1 ratio.

The study used a 14:1 concentrated dose of 1000mg of Caralluma fimbriata.

It appears that it is very safe at higher doses so hopefully there will be scope in the future for increasing that dose to increase the appetite suppression effects.

Studies with animals noted that there was no toxicity associated with the equivalent of 5000mg per kg of human weight. That makes it very safe.

Firstly, the study was published in 2006. Why has there been no more studies when there is clearly a promising commercial appetite suppressant to be proven?

Perhaps scientists thought the job was done with the results of the single study. Perhaps they just haven’t got round to doing more.

It would be very interesting to see how effective increasing the dose would be.

Our advice would be to try it for at least three months, if you are trying to lose weight, and take measurements as you go. Do your own mini study, as it were.

Try to note how much food you eat in comparison to what you ate previous to taking the supplement. For some people appetite suppressants are a very powerful tool, because together with exercise and a healthy diet it is probably the fastest way to lose weight.