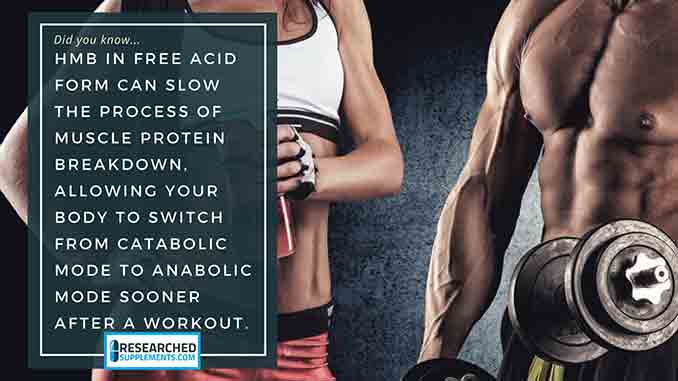 HMB – beta-Hydroxy beta-Methylbutyrate – what a ride this little metabolite of Leucine has been through in its life as a supplement.

After promising beginnings when people were hailing it as the safe anabolic steroid, through the slump where the scientists backtracked on themselves, to its current status of solid bodybuilding supplement.

Its reputation as a quality anti-catabolic (we’ll get to that) is owed almost entirely to MuscleTech; one of the sports supplement mega companies you’ll find on the shelves…everywhere.

They made a Free Acid variant of HMB, called HMB FA unsurprisingly. It’s a clear fluid and it can be taken in soft capsules.

Benefits are few in number, but to the serious athlete, bodybuilder, powerlifter, crossfitter and everyone else who use their muscles with ambition, HMB FA might make a big enough difference to shell out the money for it.

This supplement’s primary positive effect is to slow muscle breakdown. Muscle breakdown, aka muscle catabolism, is an extremely important aspect of strength and muscle mass growth.

“Anti-Catabolic” doesn’t sound as cool as “Anabolic” so HMB is mostly pitched as the latter in today’s market, even though there’s a difference, however subtle, between the two biochemical processes.

We’re stubborn, so that’s our title, and we’re sticking to it.

The issue it raises is a worthy discussion though, and one we’re willing to have any time, all the time, for too long if you’re willing to sit there and listen.

We’ll try to keep this explanation brief however.

Some supplements, like Leucine – the chief Branched Chain Amino Acid – are structured to act in response to muscle damage more than they are tuned to muscle growth.

Protein synthesis leads to muscle growth, but sometimes we can be fighting the growth process unwittingly.

Training our muscles through repetitious use of heavy weights is damaging to muscle; that’s kind of the whole point: Break it down to build it up stronger.

Somewhere in between the breakdown (or catabolic) activity and the anabolic muscle growth, there has to be a steady decrease in catabolism and a switch to anabolism.

That’s where Leucine comes into the equation. It can act as both a direct intra-muscular energy source, as well as attenuating the rate of muscle breakdown.

HMB is a metabolite of Leucine, i.e. a product of the metabolism of leucine. And it’s been found that a free acid variant of HMB, when taken prior to physical exercise, works as a more potent anti-catabolic than its parent compound leucine.

The effects are reliable person to person as well.

A post shared by Researched Supplements (@researchedsupplements) on Apr 26, 2018 at 9:51am PDT

This is by no means as reliable/consistent as its limiting effect on muscle damage, but some study subjects apparently lost some fat mass while taking HMB FA.

There needs to be further research to determine whether the fat loss effect is independent of, or indirectly triggered by, the reduced muscle breakdown benefit, which itself results in greater retention of lean muscle mass during periods of intensive training, and thus should have some fat loss effect down-chain.

How To Use HMB FA

Most people find the best way to use HMB is in Free Acid form (HMB FA) and taken 30 to 45 minutes before beginning a training session or workout.

If you consume your pre-workout in the 30 minutes leading up to your workout then maybe pop the HMB capsules just before that as the marker for the start of the pre-workout period.

It depends how much you want to spend, but you could go up to 3 grams (3000mg), but it’s fairly new to the supplement market in this form and so isn’t super cheap.

Doses of 3 grams a day have been deemed as safe, and the true ceiling dose is not really known but expected to be much higher.

More human trials are needed to determine if a higher dose is more effective or counter-productive. For now stick within the 1000mg to 3000mg range.

Honestly, when this stuff first came out…for the third time…we could be found yawning in the skeptics corner.

However, HMB Free Acid has stood the test of a few scientific studies now and come out looking good for its ability to reduce muscle damage during and post exercise.

There’s even evidence that it can boost and prolong the release of Growth Hormone. The fat burning thing is a bit dubious at the moment, but if you’re taking it for the muscle benefits then anything else is a bonus anyway.

Finally, HMB has secured a place as a decent muscle supplement. It won’t build slabs of muscle like the first claims, but neither is it the wet blanket of the second.

It’s a useful anti-catabolic supplement for people who are serious about their muscle training. And it’s safe.