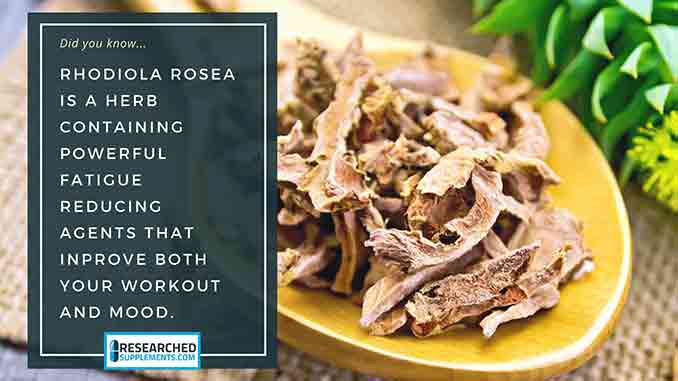 What is Rhodiola Rosea and What Can it Do

Rhodiola Rosea is a herb in the adaptogen family.

Adaptogens are particularly good at reducing the symptoms of stress and anxiety, specifically the mental and physical fatigue that is often associated with them.

For this reason they are often supplemented to improve mood, energy, alertness, memory and vitality.

Adaptogens are also synergistic with one another, making them ‘stackable’ and therefore more effective as a combination rather than isolated supplements. They have a great safety profile and have virtually zero side effects, if any at all.

Other adaptogens that are well researched and highly beneficial are Ashwagandha (Withania somnifera) and Panax Ginseng.

Rhodiola rosea is found in traditional Chinese medicine, and is found native in Scandinavia.

The main bioactive compounds in the herb that confer its benefits are called rosavins and salidrosides. We’ll discuss their optimum ratio and what to look for when purchasing a supplement later in this article.

Students with pre-examination stress have been the subject of one trial, and perhaps the most applicable to the majority of people was the life stress study.

All of these studies and more resulted in a significant reduction in fatigue, related to stress from physical and mental exertion.

There has been a steady rise in the interest of nootropic drugs, smart pills and cognitive boosting supplements since the synthesis of the first racetam family of drugs decades ago.

Movies and TV shows like Limitless and Lucy have helped perpetuate the idea that there are some natural or synthetic compounds somewhere in the world that can unleash the huge proportion of your brain that is currently underused and understood less.

Nootropic supplements can even go further and are supposed to be neuroprotective and even capable of stimulating the genesis of new neurons and nerves in the brain and central nervous system.

Rhodiola rosea is a common addition to these types of products because of its reliable benefit to cognitive function.

By reducing the effects of mental and physical fatigue, this in turn increases the amount of processing power the brain can apply to tasks.

It also means you feel better emotionally and physically; something known as subjective well-being. Your own perception of how you feel.

While this is by no means an established fact as of yet, it looks promising. It’s not surprising considering the well established link to lowered mental fatigue and stress the herb has.

One of the underlying features of anxiety and many forms of depression is the constant worrying, or overactive mind, that people suffer from. It’s tiring for them to deal with all day every day.

Therefore it stands to reason that this supplement should help alleviate some of that depression induced fatigue, and thus the depression itself.

Rhodiola should not be used alongside prescription anti-depressants as not enough is known about the potential for negative drug interactions.

A couple of short studies, a 6 day trial; and a 4 week VO2max test, revealed an interesting benefit to muscle tissue, and the preservation thereof.

Both studies found that Rhodiola reduces the activity of the enzyme which breaks proteins down during catabolic processes associated with muscle damage.

Resistance training is just the sort of muscle damage that induces catabolism, and while it’s an important process of the break-down-build-up process of muscular enhancement, it is good to attenuate catabolic activity as well.

How To Use Rhodiola Rosea

The important thing to look for is the standardization information about the rosavins and salidroside content within the extract.

An extract which gives a 3% rosavin and 1% salidroside inclusion rate is what you should look for.

Another possible inclusion you will see is the SHR-5 extract from the parent Rhodiola rosea herb. This is the specific extract of the herb responsible for the effects. Again, it should display the same ratio of rosavins to salidrosides.

Doses from as little as 50mg per day have been shown to be effective for fighting fatigue.

For combatting stress, fatigue, muscle damage and depression the recommended dosage is more in the range of 250mg to 650mg.

Anything above 650mg appears to be pointless, and potentially less effective due to some feedback loop.

Side effects have not been found during the scientific studies.

Drug interactions may occur if it is used with pharmaceutical or prescription grade anti-depressants.

If you are using a prescription anti-depressant it is highly advisable that you consult your prescribing doctor before you use any other form of depression therapy, including herbal and synthetic supplements.

This is another fantastic looking adaptogen herb. It often helps people during particularly stressful and fatiguing situations.

Students would be well advised to look into rhodiola as opposed to the more popular drugs Adderall and Ritalin as they can cause some unwanted negative effects, not the least of which is the potential for addictive behaviour.

Rhodiola goes well with the other high performing adaptogens, such as Ashwagandha and Panax Ginseng.

Those three make quite a remarkable supplement stack as each one confers similar benefits but in complementary strengths. For example, where Rhodiola is a strong anti-fatigue agent and milder for anti-stress, Ashwagandha is stronger for combatting stress and milder at pushing back fatigue.

When you look for a rhodiola supplement, look for one with a good reputation because many products containing it have been found in one study to have a much lower amount than stated on the label, or none at all.

These product companies may have since corrected their mistakes, but it’s worth going with a more expensive but trustworthy company than some of the sketchy looking herbal supplement companies that pollute the industry.