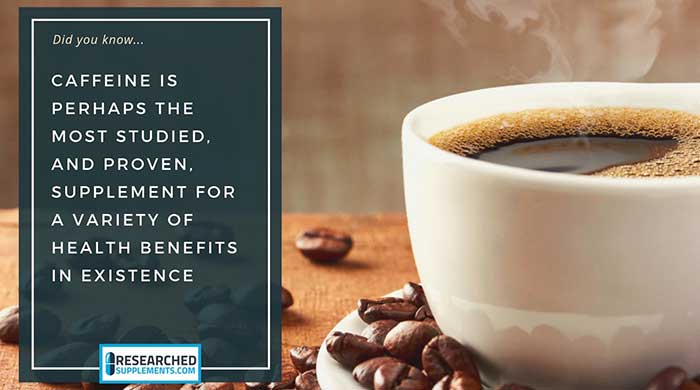 Caffeine is perhaps the most studied, and proven, supplement for a variety of health goals and performance enhancing effects including fat loss, muscle power, muscle growth and cognitive function.

It is present in the formula of a huge number of diet pills, fat burners, pre-workout training powders, nootropic products and more.

Of course caffeine is the active compound in coffee, which can have many of the effects of the purified Caffeine Anhydrous that goes into supplement products, although the pure extract is both easier to use and more measurable in terms of dosage.

Habitual use of caffeine leads to an “insurmountable tolerance”, where the benefits of use are effectively reduced to nothing regardless of how high the dose is.

From a scientific perspective, there is no doubt that caffeine can help you lose fat. It is most effective when cycled (see “How To Use Caffeine” section below), and dosage is much easier to measure and manage when the purified supplemental form Caffeine Anhydrous is used.

Caffeine triggers the release of adrenaline (aka epinephrine) and dopamine. These central nervous system (CNS) agents are responsible for caffeine’s effects, and are of course what make it such a renowned stimulant.

There are two main mechanisms by which it burns fat:

Thermogenesis – this is basically an increase in cellular heat production due to a rise in the rate of mitochondrial activity. The mitochondria are the “power stations” of cells, and they use fat as their fuel.
Lipolysis – this is the breakdown of triglycerides into their three constituent fatty acids, which can in turn be transported to cells to be burned.

One of cAMP’s functions is to force triglycerides from fat cells for them to be broken down and burned as fuel, in order to increase overall energy.

Another effect of cAMP is to increase protein synthesis in muscle cells.

These effects makes caffeine incredibly synergistic with other cAMP elevating compounds such as Synephrine and Forskolin.

Of course, there is also an indirect fat burning effect, due to the energy boosting effect caused by the release of fuel in the form of fatty acids. Having increased energy can heighten your exercise intensity or increase your exercise volume. Either will induce further fat loss.

In the above section for fat loss, we have already looked at it’s ability to increase levels of cAMP, and cAMP’s lipolytic effect.

Cyclic Adenosine Monophosphate also increases the rate of protein synthesis in muscle tissue. Proteins are the raw material for muscle growth, and protein synthesis being the creation of said proteins, the implications are obvious.

Another pathway to increased muscle growth can occur from caffeine’s ability to increase Testosterone levels. This is again down to cAMP, which has the uncanny ability to do its work in nearly every part of the human body.

When cAMP levels are elevated, they are elevated everywhere, fat cells, muscle tissue….testes.

Yes, cAMP can be active in the testicles, therein increasing the rate of testosterone production. Testosterone, in-turn, is the body’s main anabolic steroid hormone and hence another pathway via which caffeine improves muscle growth and recovery.

Caffeine’s effect on energy levels come into play again, with a direct impact on training intensity, volume and explosive power and strength. In the context of resistance weight training, sports and athletics, this results in improved muscle growth in response.

Perhaps the most underestimated effect of caffeine with respect to muscle growth is its cognitive boosting effect. Enhanced focus and tighter mind-muscle connection in the gym are incredibly effective performance enhancers. 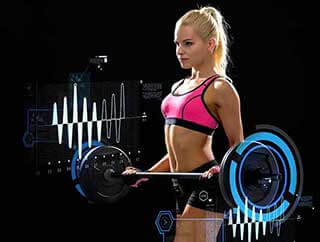 At the risk of repeating ourselves over and over, the base effect of caffeine – the increase of adrenaline and dopamine – and the subsequent increase in cyclic adenosine monophosphate are responsible for all of the effects.

Essentially whatever health goal or function caffeine improves, it’s down to cAMP being elevated in the relevant part of the body.

Generally speaking, caffeine’s performance enhancing abilities are relatively short term and is best employed as a pre-workout supplement if this is its intended purpose.

We’ve already covered this in the “Caffeine for Muscle Growth” section above, but briefly: it increases cAMP which in the testicles translates to increased testosterone production.

The boost is not huge and caffeine is not the most effective testosterone supplements on the planet but it’s a benefit that most people wouldn’t associate with the stimulant.

Studies that have looked at the effect on testosterone specifically note that it appears to only work in conjunction with exercise, when taken prior to a workout. 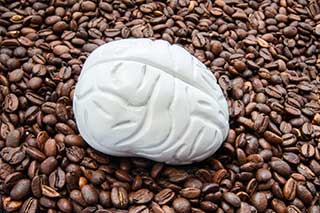 One word you might not immediately associate with caffeine is euphoria, but it is certainly a common result of caffeine studies.

Most adults are numb to the euphoric effect because they drink coffee habitually, but resetting tolerance levels by cycling off (see How To Use Caffeine section below) will allow the brain to experience it again and again.

How To Use Caffeine

Caffeine is in so many dietary and ergogenic supplements that, despite its clear benefits, it is an annoyance to some people who see it as a cop-out by supplement manufacturers: i.e. include a lot of caffeine to overwhelm the other under-dosed ingredients and the customer will perceive the effects as those of the product as a whole.

The irony is that it is an excellent supplement, and if it is used correctly, can significantly help the user in a number of health goals.

The thing to keep in mind is your tolerance level, and to try and avoid using caffeine habitually. This includes coffee drinking.

If you’re a coffee lover, then this can be the most difficult aspect of getting the most out of caffeine, i.e. not using it as much.

Daily caffeine intake causes you to become used to, or tolerant to, its effects. This basically means that no matter how much you take/drink you will no longer feel the effects until you “reset” your caffeine tolerance.

Unfortunately, it’s the beneficial effects that become dull, while some negative effects can still occur, depending on dosage. Basically, don’t keep consuming more to try and get the positives again.

Caffeine will work best when cycled. This means that you would use it for a set period of time, at a specific dosage (or slightly increasing dosage) before stopping for a shorter period of time to reset your tolerance. After “cycling off” caffeine you can start the on cycle again.

individuals will have different tolerance curves and effective dosages from one another but a good cycle to start on is 8 weeks on/2 weeks off.

That is: use for 8 weeks with a specified daily dosage (see below) and then either reduce consumption to nothing over a few days before being totally off for two weeks, or go “cold turkey” straight away for 2 weeks.

Depending on your on-cycle daily dose, dropping to zero overnight may present its own problems as caffeine withdrawal can cause headaches primarily. Hence, it might be best to reduce consumption gradually over a few days before taking the two weeks off in order to lessen the impact.

Once this cycle pattern is adopted you can tweak it to your own specifications based on how you respond as an individual.

It’s impossible to be absolute about dosages of caffeine (and of most supplements in fact) but there’s certainly a starting point that most people can work from.

We recommend beginning with 100mg per day, and this can be increased to 200mg per day after a few days.

Scientific studies and clinical trials – of which there are hundreds – agree on the 200mg per day mark as the most significant for fat burning effects.

Considering the mechanisms and pathways by which caffeine induces weight loss are the same for all of its other benefits, we’d recommend 200mg per day as your on cycle dosage.

People who are particularly sensitive to stimulants may want to stay at the 100mg mark or somewhere close. If you are one of those people, then congratulations, you are a “cheap date” so to speak and you will get more value from your supplements.

They do this because caffeine has an effect, and a significant one for their “caffeine-naive” customers. The stimulant spike of going from 0 to 300mg is quite effective in making someone believe the pre-workout they are taking is a monster. Unfortunately it may also make them feel sick as a dog.

That’s why we advise you to look at labels and decide for yourself how much of a stimulant to take for the first few times. Yes the other ingredients might be under-dosed for a few days until you acclimate yourself to the caffeine but it’s by far the best course of action.

Poor use can result in headaches, muscle tremors, nervousness, rapid heartbeat, heart palpitations, nausea and dizziness amongst others.

Gross miscalculations of dosages can result in more serious problems, much like any ingredient, but in this case we strongly advise starting with a dose you know to be small: – perhaps 1 capsule if the supplement label says to take 2 OR a half scoop if the pre-workout says a full scoop.

As mentioned earlier, coming off caffeine can have similar side effects, especially if done suddenly. The best thing to do is almost reverse the cycling-on procedure when you are cycling-off and reduce the dose for a few days until you are consuming none for a couple of weeks.

Caffeine withdrawal can cause mild headaches more than anything else, and so the gradual “weaning” approach might be the best way each time you want to reset your tolerance.

We could talk for days about caffeine, which is probably fairly futile given its ubiquitousness in the supplement industry as it is.

If you use caffeine in some form or another, you probably think its a subject you have mastered, and an ingredient that doesn’t yield much success other than the few preliminary days using it.

We’ll tell you that you might have jumped the gun, and the above article explains why.

Using caffeine seems to be an inevitability for most people who use a pre-workout or fat burner product.

Whatever you might think of caffeine is probably down to how you are using it. Any bad reputation it has is unfortunately a result of improper use, because it is a phenomenal ingredient when used effectively.

Effective use of any supplement is a combination of factors including dosage, timing, cycle period and individual tolerances.

Once you have those dialled in, caffeine will work for you in a plethora of ways. It just will.

Take ownership of your own caffeine consumption, throw out any pre-conceptions, cycle it properly, dose accordingly and just enjoy the results.