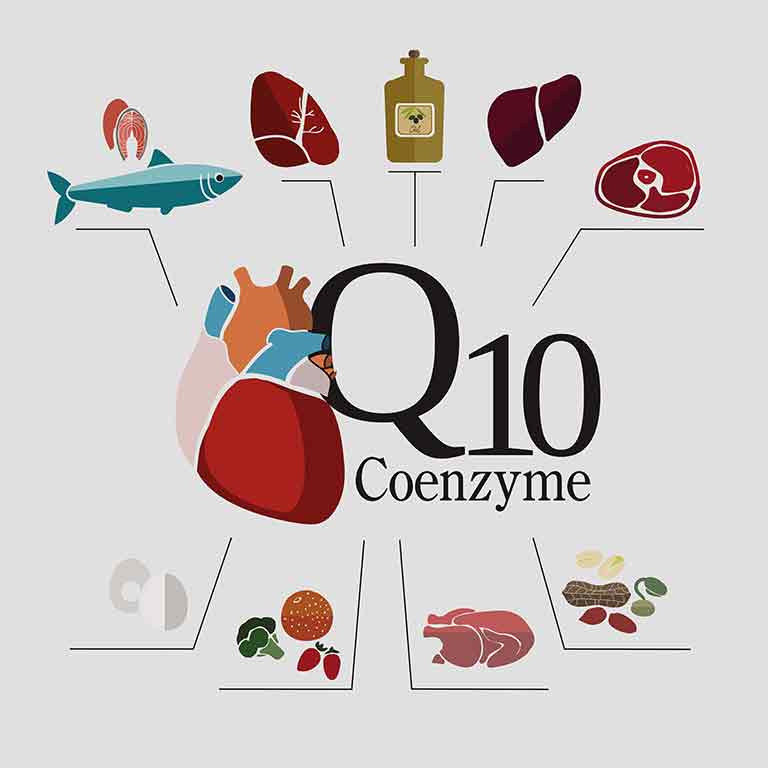 Coenzyme Q10 (CoQ10) – aka Ubiquinone – plays a vital role in energy production for the human body, animal bodies and most bacteria, and is found in the mitochondria of cells. You might be more familiar with its abbreviated identifier, CoQ10.

It is a molecule that we cannot live without, and in certain states of deficiency it absolutely must be supplemented.

There are also potential benefits to supplementing it as a healthy person who is not in dire need, much as most vitamins can be supplemented beyond their base level sourced from dietary intake.

While there may be some benefit to supplementing it as a healthy individual, the greatest effect will be for someone suffering from a deficient state, due to heart attack, fibromyalgia, depression, migraines, male infertility and even Parkinson’s disease, to name a few.

Coenzyme Q10 is popping up in a variety of supplements, including fat burners and pre-workout powders.

Some areas of research are still thin on the ground but it appears to be one of those molecules which looks amazing on paper, but not as useful in reality.

Again, low enough levels can mean death, and so supplementing it as per that condition is a life-saver.

All we are saying is, it may not be the panacea of health, vitality and life extension that is being claimed of it.

Altogether there is far too many minor health benefits of Q10 to call it anything other than a general health supplement.

Its primary role in your body is to help produce energy, and it does that from within the mitochondria of cells. Mitochondria can be thought of as the miniature powerhouses for each cell.

The molecule that is Coenzyme Q10 is more of a component within the powerhouses. It is integral to the formation of ATP, adenosine triphosphate, the fuel of life.

So you’d think supplementing it would turn you into some kind of mutant superhero, but it’s not the case.

There is evidence to suggest it can reduce general and exercise-induced fatigue a bit, but that’s a far cry from jacking you up enough to merit buying a cape and a spandex onesie.

It has been seen to increase testosterone, though currently only in infertile men.

One interesting study involving athletes demonstrated a reduction of muscle damage. This is definitely worth investigating further, but since 2008 this hasn’t happened.

Coenzyme Q10 as a Treatment for Various Deficient States

This is where CoQ10 really becomes invaluable. There are several health conditions, or diseased states, that are synonymous with low, even deficient, levels of this molecule.

They include the following:

When used as a therapy to combat the symptoms of the above conditions, CoQ10 is often notably potent.

How To Use Coenzyme Q10

The latter described health conditions will be treated by a doctor, who will be thoroughly aware of the supporting evidence for CoQ10 supplementation.

For anyone looking to avail of the general health benefits of this pseudovitamin, there are numerous stand alone products and numerous multi-ingredient products that include it.

It is necessary to take it with food as it is a fat soluble molecule.

Thankfully, it can be taken in a reasonable range. We recommend about 100mg to 200mg per day.

Sometimes these things are dose dependant, i,e. the more you take, the greater the effect. But it doesn’t seem to be the case here.

If cost is relative to dosage, and it’s not just part of a larger formula, then take the 100mg dose, or even slightly less.

CoQ10 has a very strong safety profile, and does not appear to cause any side effects at effective doses.

It is unknown whether very high doses can have some hidden, long term effect but so far nothing has been found.

The issue of high doses is a moot point though as the 100mg per day dose appears to work as well as any.

Should you suffer from any of the above described conditions and you are not supplementing with this, we recommend you talk to your doctor as soon as possible.

Supplementing it as a healthy person with no CoQ10 deficiency might be slightly redundant, but there is always the chance of conferring benefits as yet undiscovered in scientific intervention studies.

Given the importance of this molecule in our lives, and the therapeutic effect it has for people suffering from certain conditions, it’s probably a good enough idea to take it as part of an all round multi-vitamin or general health supplement.

Certainly, the reduced muscle damage and reduced fatigue are interesting avenues for further research, but we’d like to see more data before shouting about this one from the rooftops.