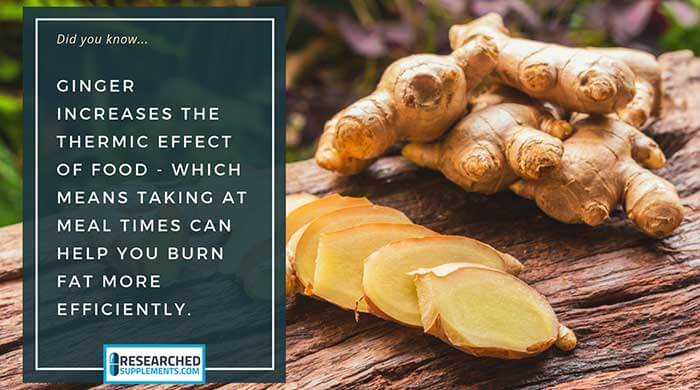 There is probably some ginger in your kitchen cupboards, and if there isn’t, you will probably want to buy some after reading this.

It is one of those household spices that people take for granted, and kind of know that there are some health properties in there somewhere, but don’t look into it any further.

It’s just one of tens – if not, hundreds – of spices and other natural food items we have lying around that can significantly improve health and well-being.

However, instead of paying attention to these accessible goodies, many of us get pulled in by the marketing of this or that product and forget that they have shelves of excellent supplements at home, and for a fraction of the price.

Here are some of the benefits of supplementing with Ginger. There are different ways to take it and different parts of the root which are better. We will get to that in the Usage and Dosage Guidelines later. For now, the pros:

Ginger is the common name for the root portion of Zingiber officinale Roscoe. It contains over a dozen bioactive compounds, including Quercetin, Kaempferol, Green Tea Catechins, Naringenin and Curcumin (Turmeric) – the last one explains the yellow colour of the ginger rhizome.

Ginger has to be one of the oldest traditional eastern medicines. Thankfully, many of the benefits are have not been lost on recent generations.

It is widely known that it helps alleviate nausea and that there is some benefit to the cardio-vascular system, but the other heap of positives, and information such as how much to take might not be so prevalent.

Ginger can be consumed in a few ways, including:

Rhizome is the vertical aspect of the root and typically amounts to 1g of ginger extract per 1 teaspoon of it grated.

There are many health benefits to consuming ginger on a daily basis. However, the likelihood of getting all the benefits – testosterone boost included – from using the fresh product in a variety of ways is low. It may also get old, quickly.

If you are particularly interested in pursuing the Ginger route (excuse the pun) then a supplement containing concentrated powdered extract is probably the most hassle-free method.

We will expand on this in the next section.

The part of the root most people use is the rhizome, the vertical part.

Given the number of ways it can be consumed, a dosage of 1g ginger extract can be a time consuming thing to obtain, or a simple two-second operation.

Keep in mind the following – which are perhaps both extremes of the effort spectrum – before we tackle the next problem:

Now, take note that to achieve the anti-nausea effect, you will need up to 3g extract.

And, to get the Testosterone boost, you’re looking at 14 grams! – See you in the supplement aisle. 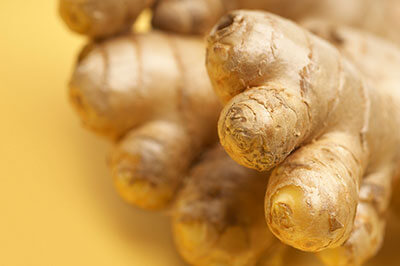 Is Ginger Safe – Are There Side Effects?

Up to and including the 14g per day for testosterone boosting, there are no major side effects reported.

The only one of note is a potential, but mild, gastrointestinal discomfort which seems to be unpredictable and can start from 1 gram upwards.

People of average weight would be able to take in excess of 16 grams per day for well over a month and experience no side effects.

Ginger should not be taken alongside other blood thinning medication due to its anti-coagulant properties.

If you’re into making teas and home-brew ginger ale with crystallized extract then by all means, go ahead. It cannot hurt to supplement your intake this way.

For the more direct approach, we’d recommend using a supplement which will contain a concentrated extract.

1 to 3 grams per day seems to be the average dosage for most of ginger’s effects. The testosterone boost, while it’s an interesting result from the the clinical trials, it might not be the simplest way to achieve this.

Having said that, one clinical study showed that the increased androgenic activity from the equivalent of 320mg/kg bodyweight (that’s about 22 grams for a 150 lb / 68 kg person) could shrink testicles. That’s an effect rarely noted outside anabolic steroid use.

Good luck scoffing that much though.

Please read the following if you wish to know more about the studies and specific benefits / health properties of ginger.

Trends show a positive effect on post-operation nausea and chemotherapy related nausea but not to the same extent as morning and motion sickness.

Chaiyakunapruk N et al. The efficacy of ginger for the prevention of postoperative nausea and vomiting: a meta-analysis. Am J Obstet Gynecol. Jan 2006 [https://www.ncbi.nlm.nih.gov/pubmed/16389016]

2g a day of fresh grated root even works in one study to reduce risk of colon cancer (brought on by inflammation in the colon).

Ginger increases the thermic effect of food, which basically refers to the energy and metabolism increase food provides. One can infer that this boosts overall calorie burn compared to that of eating without it.

The appetite suppressive effect is independent of this.

From this study it appears ginger has an overall beneficial effect on blood lipid profiles. In the long term this could translate to improved cardio-vascular health.

While the dose would have to be quite high – 14 grams per day – to boost testosterone, the results cannot be ignored, leading one to wonder if the androgenic agent responsible has been isolated for performance enhancement purposes.