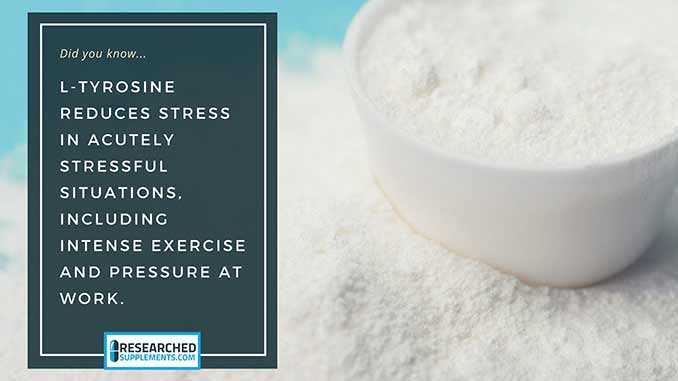 L-Tyrosine is an amino acid which is often promoted as a weight loss aid, a cognitive function booster, and a stress reducer.

It can be found in many commercial supplements, including fat burners, general diet pills, nootropic “smart” pills and pre-workout powders.

The scientific evidence amassed so far highlights its main mechanism as increasing the production of neurotransmitters noradrenaline (aka norepinephrine and dopamine).

This pathway is a well known and well researched topic in a number of ingredients which tinker with levels of the same neurotransmitters in similar ways.

We can therefore draw some direct conclusions from the direct studies carried out with L-Tyrosine itself and from the studies and clinical trials using other similar compounds.

While it has become a popular ingredient, it is perhaps misunderstood in terms of its primary benefit. People often assume that because it is stimulatory it will act much like caffeine.

In fact it combats stress, when there is an acute stressor such as exercise, hence why it is often in pre-workout powders.

Nonetheless, it technically works via the same pathway as some stimulants and thus should be regarded as such when taken alongside others to ensure side effects of overstimulation do not occur.

The amino acid itself can be broken down to produce more adrenaline and dopamine, which in-turn should confer some health benefits, including increased metabolism for faster fat burning rates.

Structurally, it shares roots with thyroid hormones, and this in combination with the aforementioned adrenaline production puts it squarely in the fat burning category as far as supplement manufacturers are concerned.

Theory doesn’t always translate to practice though and L-Tyrosine doesn’t tend to boost adrenaline or dopamine because they are so well regulated by enzymes along the chain of reaction.

However, where noradrenaline is depleted due to stress like intense exercise, L-Tyrosine becomes useful for replenishing it, and easing the effects of stress.

While this apparently has no real fat burning benefit, it may help someone who follows both an exercise program and a calorie controlled diet to reduce the associated stress. That is the only tangible link to weight loss, and it’s a charitable one at that.

Again, one would expect L-Tyrosine’s direct metabolism into adrenaline and dopamine to increase performance in a classic stimulatory way.

And once again, it appears incapable of boosting performance, and instead able to replenish what is lost during the stress of exercise, or rather provide a buffer which attenuates the loss of noradrenaline.

So in the context of performance, we can’t really call it a “performance enhancer” per se, but rather a stress buffer for attenuating deterioration in performance over time.

Doesn’t quite roll off the tongue as well, but hopefully you get the point. It reduces the negative, rather than adding to the positive.

Finally, we arrive at what is probably the primary reason for supplementing with L-Tyrosine. If you’ve read the above sections then you’ll know that it’s added to diet pills and training supplements for this reason in reality, but usually touted as something more than it is.

It may be useful for reducing stress, as one study looking into acute environmental stressors on humans concluded.

Tyrosine has also been shown to reduce stress in physical and emotionally taxing scenarios, like that of the military cadet study.

Both of those studies, and another following sleep deprived subjects, also showed an improvement in cognitive function during the period of the acute stressors.

Cognitive function is not improved from a non-stressed baseline though, it is only when the stressor is present. Like the performance benefit, the cognitive benefit is a situational reduction of negative effects.

The same can be said for working memory, and probably all aspects of cognitive function.

How To Use L-Tyrosine

Any of the reasons mentioned above are valid uses of this amino acid. If it’s in your pre-workout or fat burner then just remember that it will have an additive effect with other stimulants, despite the counterintuitive nature of the stress reduction benefit.

If we were to choose one or the other it would be as a pre-workout supplement. That noradrenaline buffer is more useful to us during exercise than dieting.

Mostly, it comes down to dosage and whether or not you are working out at high intensity. The more intense your workout, the more useful something like Tyrosine becomes.

You will probably find most sports supplements contain about 500mg of L-Tyrosine, because that’s the minimum effective dose, and manufacturers love doing the bare minimum.

If you see it included between 1000mg and 2000mg then you’ve got a better quality product, at least as far as this ingredient is concerned.

Higher doses are in the 5 grams to 10 grams range, but they might cause gastrointestinal problems, especially if you do a gut-busting workout (‘scuse the pun) on top of it.

Basically, with the bigger doses you can start to drink it an hour before the gym and finish about 30 minutes before. That’s probably a moot point for most people though as the majority will take a pre-workout with several ingredients in it, and you’ll never see 5 gram doses of L-Tyrosine in those.

Very high doses of Tyrosine are not advised, but you will never find those amounts in commercial supplements.

If you find a product you have to measure yourself then do not go above the 5000mg dose mark. The first thing you are likely to experience above that is intestinal upset. The toxicity would come at even higher doses.

It can affect blood pressure, heart rate and emotional state at high doses as well. It’s best just to stick to 500mg to 2000mg as a pre-workout.

Our overall impression of L-Tyrosine is: a decent addition to pre-workout supplements.

Dosage is key with most supplements, and it’s important here as well. Anything lower than 500mg in a pre-workout is on the weak side, and we’d rather the space was taken up my something that is exceptional at similar inclusion weights.

For example, it would be far better to have 400mg of Ashwagandha in the mix than 400mg of L-Tyrosine.

That said, it’s useful as a buffer to reduce stress during really intense workouts and it will work well with other cognitive boosters to provide a synergistic effect, again during periods of acute stress.

That’s the point to take away from this: L-Tyrosine’s benefits only really become apparent under conditions of acute stress, and more often than not, that stressor is intensive exercise.

We have tested the most popular and best performing pre workout supplements.