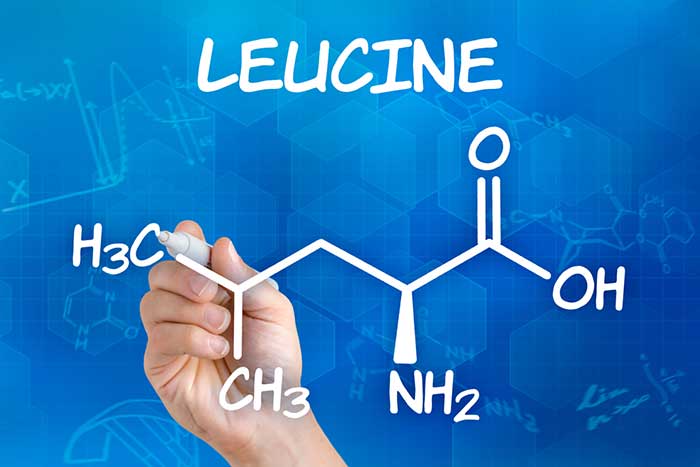 Leucine is a branched-chain amino acid the body uses for building muscle and providing energy. It’s a very popular supplement ingredient that offers value to athletes of all kinds. It’s not just for bodybuilding.

There are 20 amino acids in use in the body and you can get them all from food. However, the body is capable of manufacturing 11 of them. These are referred to as non-essential amino acids. If your diet does not provide them your body will make its own.

The other nine are classed as essential amino acids. Your body cannot make them so it’s essential you bring them into your body via food or supplements.

Leucine is an essential amino acid. It’s also a BCAA and, when it comes to muscle growth, it has dibs at being the most important amino acid there is.

BCAA stands for branched-chain amino acid and there are just three of them:

The term “branched chain” comes from their chemical structure, which none of the other amino acids in the body share. Up to 30 percent of human muscle tissue is made from BCAAs.

The reason leucine has extra importance for muscle growth is the body cannot begin protein synthesis without it. More on that later.

However, before going any further, it makes sense to take a quick look at the different forms of this very essential amino acid. 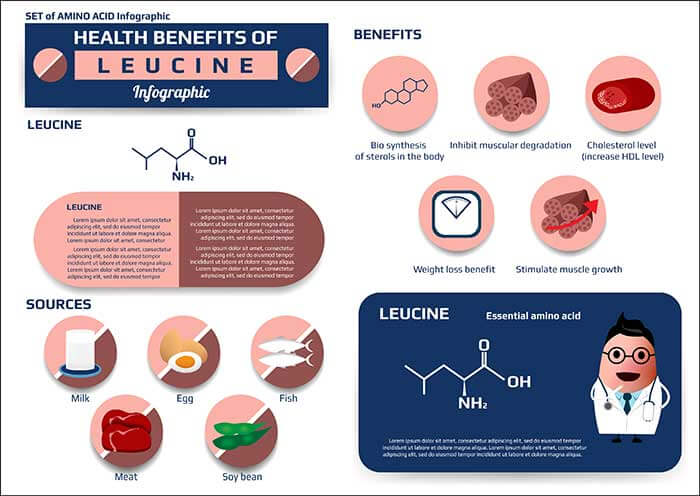 The fact that there appears to be three different forms of leucine throws a lot of people.

L-leucine is the amino acid in its natural form. It’s what your body extracts from food. D-leucine is made in a lab and is essentially the same as l-leucine. The only difference is, on a molecular level, they are mirror images of each other (enantiomers).

Both forms are used as supplement ingredients. However, although “leucine” is more correctly used to refer to d-leucine, people often use the name as a blanket term. 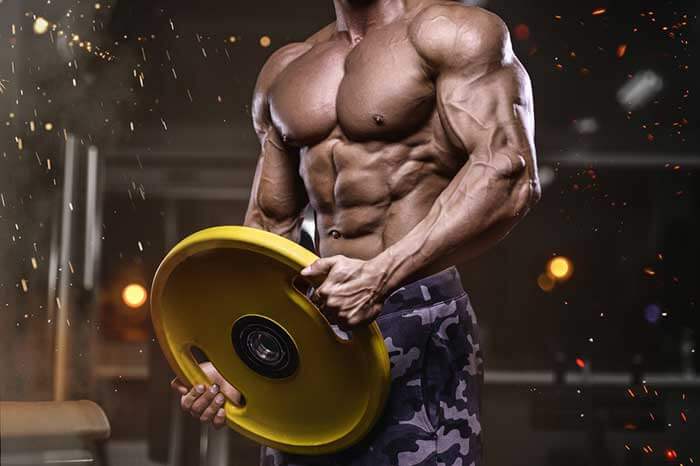 Leucine: The Key to Muscle Growth

The body uses amino acids to build muscle via a process known as protein synthesis. However, before the amino acids can do that they have to enter the cells and that’s not a simple as it sounds.

The cells are protected by a membrane and none of the other amino acids can get through without leucine’s help.

Unlike the other amino acids, leucine can break through the membrane. Once inside the cell, it triggers a multi-protein complex called mammalian target of rapamycin complex 1 (mTORC1), which is responsible for governing protein synthesis.

After mTORC1 is successfully triggered, the cells open up to the other amino acids and muscle building can begin. [SOURCE]

Exercise causes the muscles to breakdown. The body is biologically pre-programmed to repair that damage. Along with the other two BCAAs, Leucine accounts for a larger percentage of muscle tissue than other amino acids do, so it stands to reason getting more of it is no bad thing.

Supplementing with Leucine can help speed up the repair process, though it’s important to remember it cannot go it alone. The muscles will need all the other amino acids as well. Especially isoleucine and valine.

Pain of any type is unpleasant but, when it comes to the muscles, it provides a good indication of how fast the healing process is working. Less pain in shorter duration is a very good sign.

In one study, carried out on rats suffering from cancer cachexia, supplementation with leucine increased muscle mass by over 20 percent.

Not only is this a significant increase, it’s better than it sounds. Cancer cachexia normally causes heavy muscle wastage that cannot be reversed by normal nutritional support.

Human-based research is equally promising. Scientists in Paris, France evaluated the results obtained by BCAA supplements and noted the important role leucine played in protein synthesis. They then went on to suggest abandoning treating sick patients with BCAAs and concentrate on using leucine instead. [SOURCE 1, SOURCE 2, SOURCE 3] 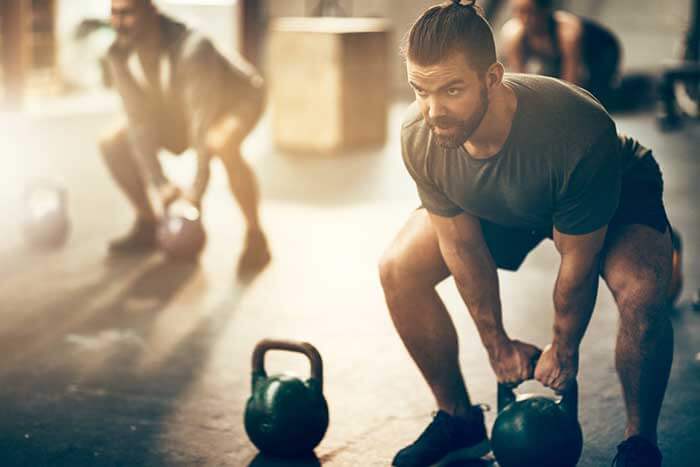 Leucine as a Strength Enhancer

The results of a 12-week study conducted on 26 men suggest supplementing with Leucine may produce significant gains in strength.

None of the 26 men who took part in the study had experience training with weights. During the study period, all of them began training two times per week, under the supervision of the researchers and following a set resistance training program involving eight standard exercise machines.

As is generally the case with studies of this nature, some of the men got supplements containing the amino acid. The rest took a placebo. The strength gains achieved by the leucine group were far superior to those of the placebo group. [SOURCE]

Apart from being a key player in muscle growth, leucine has also proven to be good for boosting physical performance. Many athletes use it for this purpose and it’s got an excellent reputation for delivering the goods.

The results of a study, conducted at the Institute of Sport and Exercise Science at James Cook University in Australia support the amino acid’s use as a performance enhancer and as a power booster too.

The participants underwent a number of different tests including one where they had to row at 70—75 percent maximum aerobic power until they were too exhausted to continue.

When the researchers assessed the resulting data it revealed the leucine group had achieved significantly higher increases in power and rowing time. [SOURCE]

Leucine is also a fat burner. Bearing in mind its ability to enhance protein synthesis and muscle growth, this gives it extra value to bodybuilders.

Fat burning always requires a calorie deficit. The body won’t burn fat if it has a sufficient amount of calories available from food. However, there’s a problem. When such a calorie shortage occurs the body tends to breakdown a small amount of muscle tissue as well.

This presents somewhat of a double-edged sword to bodybuilders. On the one hand, they want to ditch their excess fat and improve their muscle definition. On the other hand, losing muscle is the last thing they want. They worked too hard to get it in the first place.

In fact, be they track athletes or amateur football players, most athletes are unlikely to relish the thought of muscle loss.

Just by its presence, muscle tissue exerts a 24-hour calorie drain because the body has to use calories to maintain it. That being the case, even the normal weight loss crowd will see more benefit if they can burn fat without loss of muscle mass. 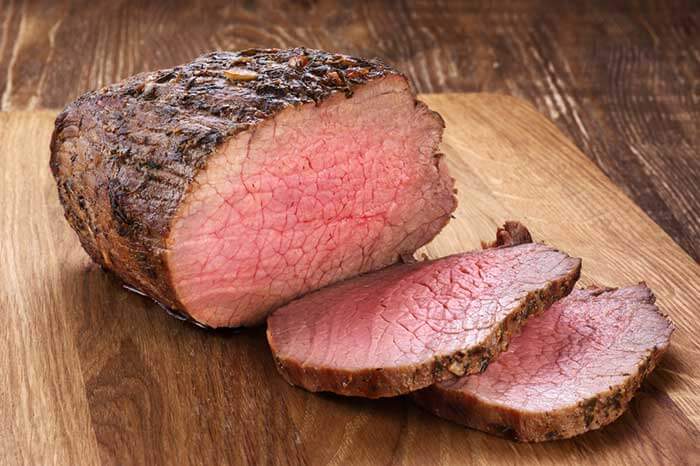 Taking a supplement is a good way to deliver Leucine to the muscles as fast as possible. This may be especially beneficial just before or after training. However, there are plenty of leucine-rich foods to choose from.

A few examples include:

Leucine is a versatile amino acid that plays an important role in muscle growth. In fact, bearing in mind the way it opens up the cells so the other amino acids can get in and go to work, you could say it’s a “key” player.

On top of this, it accelerates healing, prevents muscle wastage, and increases strength, performance, and fat loss. It’s little wonder it has become such a popular supplement ingredient.

However, although there are plenty of reasons for using leucine supplements it’s important not to become overly focused on the idea of getting more of it into your body.

Your body needs all the amino acids. It needs other nutrients too. A balanced diet is important. That said, there is no denying the fact that leucine is probably the most important amino acid of all.

And let’s not forget it’s an essential amino acid. Your body cannot make it. The only way it can enter your body is via the mouth.

Okay, you can inject it too (shudder), but that’s going into the realms of medicine. Unless your doctor is injecting it as part of a treatment, all your leucine is going to be dietary.