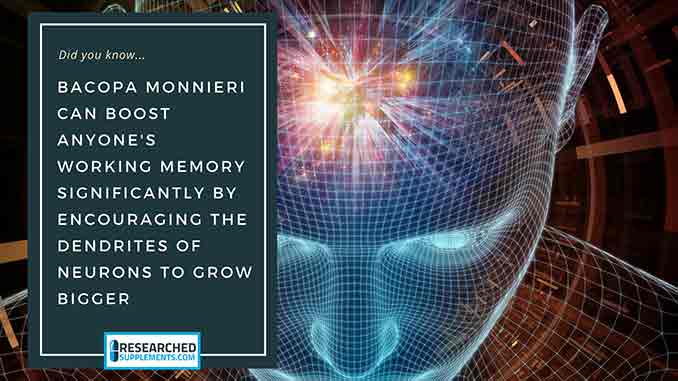 Used in traditional Indian medicine, or Ayurveda, this plant is known for its cognitive boosting capabilities, and has earned its place in the group of natural nootropic herbs.

True nootropic compounds do not cause negative side effects and actually improve the mental health, and indeed physically protect the brain from damage, when supplemented.

What makes the nootropic class even more selective is their ability to provide benefits to people of all age groups, as opposed to merely attenuating age related cognitive decline.

This means that Bacopa monnieri can boost certain aspects of the brain’s function – an important distinction when considering a supplement as a young person.

Bacosides are the active component of Bacopa, and a supplement’s efficacy is reliant on their concentration. We’ll talk about this more in the dosage section.

By encouraging increased growth in nerve endings, called dendrites, the communication efficiency from neuron to neuron is improved.

Due to this dendrite growth effect, Bacopa monnieri takes a while to start working with respect to improved memory formation. Studies on the herb have noted around a month to a month and a half (30 to 45 days) being the time to noticeable effect.

Several intervention studies have noted the significant improvement in memory formation but perhaps the one that stuck out to us, and bore the most relevance to most people is a study which involved people aged 18 – 60 carried out for 90 days.

There is a high level of agreement across the studies that working memory and spatial working memory in particular is improved after Bacopa supplementation.

It is also an adaptogen; a group of compounds able to reduce anxiety and/or stress. We have discussed other adaptogens on this site, including Ashwagandha, Rhodiola Rosea and Panax Ginseng.

Bacopa appears to work particularly well with Ahwagandha to provide synergistic benefits beyond those caused by supplementing either one in isolation.

Overall the anti-anxiety effects of Bacopa are less acute than the benefit to memory formation and as such the latter is our primary effect, and probably the one most people will supplement it for.

One study that took measurements at 5 weeks and 12 weeks noted that the supplement’s benefits were greater at the 12 week mark than that of the 5 week mark, supporting the time dependant theory of Bacopa’s effects.

Another study on over 65 year olds found a significant reduction in anxiety, depression and forgetfulness as well as the working memory benefit.

How To Use Bacopa Monnieri

Working memory is the brain’s equivalent to RAM (Random Access Memory) in a computer, i.e. the amount of information you have buffered for immediate use.

The good thing about this herb is that it can boost your working memory function whether you are suffering from a degradation or are completely healthy.

As a supplement it’s best taken in capsules if you want to use it on its own or with a formula alongside other nootropic ingredients.

For people with stressful jobs or mild anxiety, it even doubles as a relaxation aid, albeit with less potency than its effects on working memory.

Bacopa is fat soluble and should therefore be taken with a meal, or source of fat.

Most standard supplements will contain around 320mg of Bacopa monnieri extract standardized to 55% Bacosides.

That means the bacosides are 55% of the total extract by weight.

It is possible to use it in leaf or powder form, but you would need more in weight to get the desired quantity of bacosides. A dose of 750mg to 1500mg of powder or leaf would be sufficient.

Take it with a meal as it is fat soluble.

In the intro, we said there were no adverse side effects of nootropic supplements, and there aren’t to any degree of severity.

There is a chance of mild stomach/gastrointestinal discomfort with regular doses. Again, it is alleviated by taking it with a meal.

If you value your ability to work with a lot of information at the forefront of your mind, then this could be the herbal supplement for you.

In studies, it has repeatedly demonstrated notable benefits for working memory and some reduction of anxiety.

Bacopa is making its way into different types of supplements but it’s the cognitive function effect that it is included for, even if it’s a diet pill or a pre-workout.

The most important thing to remember when taking it is that it will only start to be noticeable, benefit wise, after the first month, because it needs time to increase

Using it alongside other adaptogens like Rhodiola rosea and Ashwagandha will have a synergistic effect. It also improves the benefits of Green Tea and Curcumin.