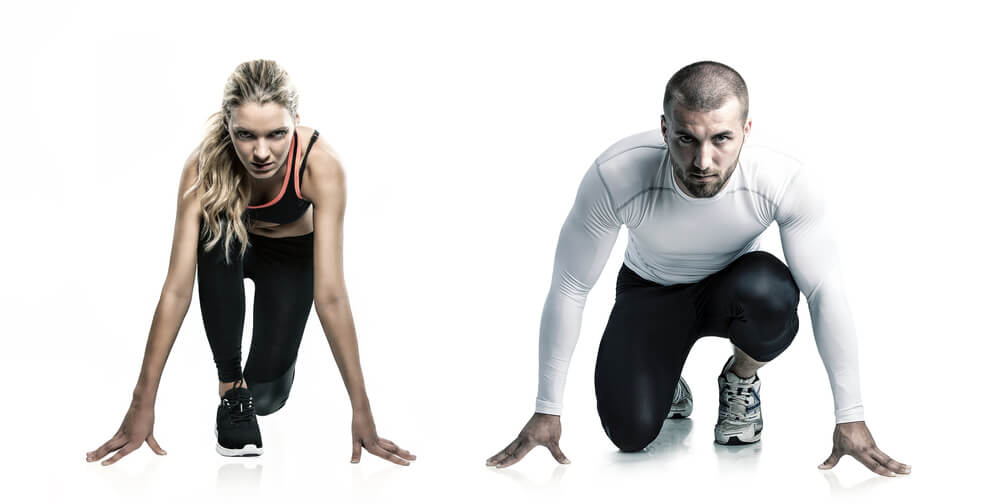 What is Betaine and What is it Used For

Betaine is an osmolyte (which may increase physical performance enhancement) and a methyl donor (which may help prevent heart disease).

It helps retain cell integrity and hydration under stressful conditions, kind of like Creatine.

Its trimethyl structure allows it to donate a methyl group to homocysteine to make it L-methionine; and therefore a useful donor itself.

Science backs it up on the homocysteine point, and is looking good for performance enhancement, although more research is needed. Especially considering creatine might render it a moot point. 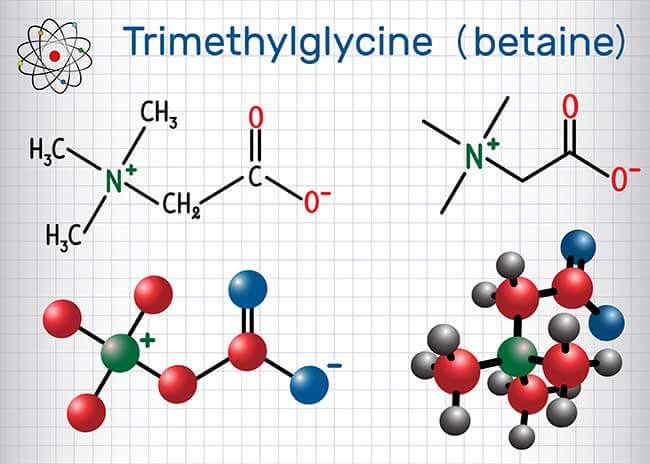 Betaine is technically a group of molecules, including Trimethylglycine (the amino acid glycine with 3 methyl groups attached). As this is the most important dietary betaine molecule, it is widely known as the betaine.

Trimethylglycine (TMG), therefore is also known as Betaine, and was discovered in Beet Root, long known for its high nitrate content and benefits to athletes. It has since been found in many different foods and as a standard component within the human body.

Glycine Betaine / Trimethylglycine / TMG is the molecule we refer to as Betaine, and is the one most commonly supplemented for the reasons laid out in this article.

It exerts its effects through two major mechanisms, which can benefit health and improve performance and adaptation to resistance strength training:

Editor’s Note: betaine seems promising, but it isn’t worth buying if creatine overshadows it.

One source talks about it as if its effects can just be bolted on to creatine’s. Another reliable reference doubts this is possible!

If you’ve got the money, try both, it might work for you and then you’ll know more (assuming you can record your changes reliably enough and lose any bias you have in your mind).

If you can only choose one, choose creatine all the way until more is known about betaine.

Betaine’s structure of three methyl groups attached to glycine makes it a methyl donor. This has significant health implications because it can reduce levels of homocysteine, which is an amino acid associated with causing heart disease.

Due to the “trimethyl” nature of betaine, it can donate a methyl group to convert homocysteine into L-methionine which is itself cardioprotective.

Secondary to this, it can increase levels of other methyl donors (e.g. S-Adenosyl Methionine), and these go on to donate methyl groups around the body.

Homocysteine – Why Is It Bad?

Homocysteine is an amino acid, a product of the breaking down of proteins during the metabolic process. A metabolite.

High levels of homocysteine have been associated with heart disease and other cardiovascular problems (and even osteoporosis, birth defects, certain cancers).

This link does not necessarily mean that it is the direct cause of such health problems, and studies looking into whether a reduction of homocysteine will in-turn reduce occurrences of heart disease have not produced a definitive conclusion.

And What’s this about the Liver…?

Other studies have shown that betaine may have another quality – a treatment for fatty liver and thus the reduction of liver fibrosis. However, the dosage used in such studies were far higher than current recommended therapeutic/performance enhancing levels.

The jury is still out on betaine’s heart protection and liver protection benefits, but the evidence looks good so far.

As an osmolyte, betaine acts similarly to creatine in that it can pass in and out of cells and increase hydration.

Increased levels of betaine are associated with improved cell hydration and protection from stress (weight lifting being a good example of stress).

This property gives betaine it’s potential as a performance enhancer; and the reason many bodybuilders, athletes and sports players in general are taking it daily.

In terms of its ergogenic benefits – those of performance and physical enhancement – betaine works in a similar way to creatine.

Increases in power output has been shown during human clinical studies that assessed the use of betaine vs placebo alongside resistance training.

Still, there have been studies conducted with trained men and resistance training, which is a lot more than many supplements can take to the bank, so let’s have a look at some of the key studies:

Effect of betaine supplementation on power performance and fatigue

In 2009, twenty-four active college-aged men were split into two groups and given 15 days of either betaine supplementation or placebo. The intention: to measure betaine’s effect muscle endurance, power performance and rate of fatigue.

Results: no differences were seen in reps to exhaustion or number of reps performed at 90%+ peak or mean power in the bench press exercise.

No other power assessments were different between groups.

Conclusions: the Scientists concluded that after two weeks of supplementation for these active college students, betaine improved the squat exercise endurance and quality of the reps.

Ergogenic effects of betaine supplementation on strength and power performance

Twelve men with at least 3 months resistance training were tested this time for strength and power effects of supplemental betaine.

Conclusions: betaine may increase power and force in certain performance circumstances. The differences were greater in the upper-body muscle groups.

Men were given 2.5g betaine in 500ml of Gatorade and the placebo group were just given the 500mg Gatorade. The following tests were carried out:

Results: nothing of statistical significance. However, moderate increases in total reps and volume load for the bench press were noted in the betaine group. Also the betaine group’s muscle tissue oxygen test revealed a little less O2 post-exercise which hints at betaine perhaps increasing oxygen consumption during exercise.

Effects of betaine on body composition, performance, and homocysteine thiolactone

This is perhaps the study which has garnered most attention in the sports supplement world, as the amount of resistance training experience in the participants of previous studies was not great.

People who are past the initial – and quite dramatic – muscle and strength gains of the first year of training are perhaps the best subjects to determine the ‘real’ efficacy of a compound such as betaine.

In this study, 23 men were chosen, each of whom had an average of nearly 5 years training and just less than 17% body fat. The periodized training programme lasted 6 weeks and 12 of the men were given placebo while 11 took 2.5g betaine in 1.25g doses twice a day.

The following parameters were measured:

Back Squat training volume increased significantly for both groups.
Thigh Cross Sectional Area did not change significantly between groups.
Performance variables yielded no significant differences though vertical jump trended towards improvement in betaine group only.

Other studies range in purpose and design of course; not everyone studying betaine is interested in benefits to physical performance enhancement.

Dosages within the studies have ranged from 500mg (0.5g) to 9000mg (9g) and although the interaction with homocysteine and cell water hydration are the main benefits, there is some promise of it improving nitrate/nitrite levels.

Also, one study using quite high dosages resulted in very positive implications that liver fibrosis could one day be treated – or part treated – in some way via betaine supplementation.

…but back to muscles…

From the Cholewa studies (above, last) and others, it looks as though betaine has some excellent potential as an ergogenic supplement. However, we will need more research to determine more precisely the mechanisms by which it works and the possible benefits it could offer.

Hopefully, optimal dosage is one outcome of future research, together with some more precise indication as to its synergy, interaction or simple redundancy alongside creatine supplementation.

Interestingly…A gram (1000mg) of Choline (see cholinergics like Alpha GPC) will increase serum betaine levels to the same amount as a gram of betaine.

It is even cheaper than betaine on the bulk market.

Creatine and betaine do very similar things for performance enhancement so we must wonder whether the combination of the two will have an additive or redundant effect.

Some good news: they do not contraindicate one another, so taking them simultaneously at recommended dosages will not be harmful.

The minimum dosage shown to be active in reducing homocysteine levels from the research is 500mg per day.

Dietary (including training) supplements seem to dose within a range of 2.5 to 6g per day. If the product is a pre-workout blend, for example, you are likely to see the lower end of that spectrum (or even lower, in the same way that creatine is under-dosed in pre-workouts).

Any dose of 2.5g daily and above should be split into 2 or more separate ones, taken at different times of the day.

Is Betaine Safe – Are There Side Effects?

At really high doses, like in the liver fibrosis study, where up to 20g of betaine was consumed, it may cause diarrhoea.

Also, like creatine and other osmolytes, it will cause some water retention.

This is its purpose as much as a hindrance (to some people) but if you want the benefits of its osmotic maintenance and cell hydration then you need to make peace with some mild bloating at the start of your betaine cycle.

There is a large and statistically supportive scientific basis to be able to say that betaine has a positive effect in preventing the increase of homocysteine.

These effects alone may be enough for some people who are considering supplementing for health reasons.

If you are an athlete who engages in strength / power based sports such as bodybuilding, crossfit etc. then the research so far is promising, if limited.

One of the biggest questions yet to be answered is whether or not betaine has a complimentary effect on creatine supplementation or if it is effectively ‘washed out’ by creatine’s dominance.

In lieu of a super clinical trial using experienced strength athletes and creatine plus placebo control group and a creatine plus betaine group, it may be easier to do your own experimentation.

Guys that already use creatine, that follow a regimented gym schedule, have their diet in check and measure progress closely may want to add betaine and see if they notice any changes in:

If you are one of these men and decide to add your results into the empirical pile, send them our way and we will be sure to publish them.

In the meantime, if we were to make a recommendation on betaine supplementation, we might say:

It’s worth trying 2.5 grams betaine + 5g creatine per day, split into 2 or 3 separate times a day.