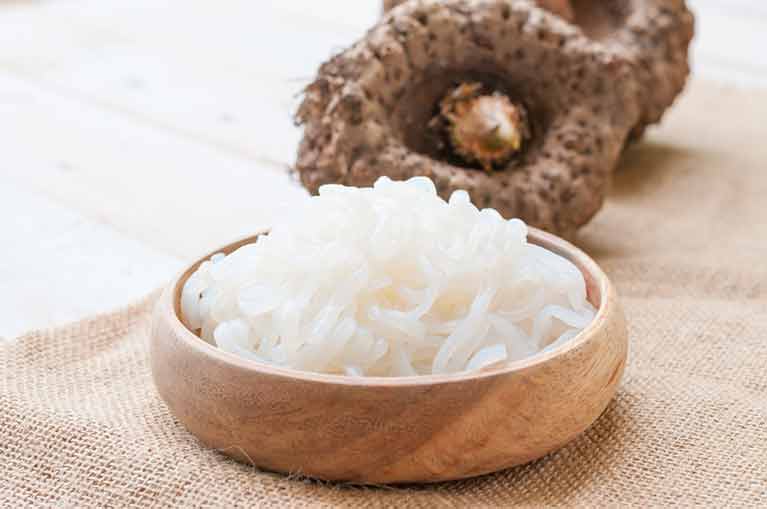 Glucomannan is a soluble fiber and not some sort of eye disease, in case you were concerned.

Technically, it isn’t really a supplement in the truest sense of the word because your body cannot absorb it.

The way dietary fibers like glucomannan work is by giving your gut flora / biome / bacteria something to do instead of digesting food so to make you feel fuller.

And that’s the primary reason for taking glucomannan: it soaks up water and other gut juices and forms a soft, stodgy ball in your stomach for a while, curbing your appetite and slowing digestion rate.

Another thing it can do is almost the opposite of adding something to your system. It can actually take sugars out of your bloodstream, smoothing out the sugar spike of many high carbohydrate foods.

Cholesterol balance can be improved with soluble fibers like glucomannan as well. In a similar way that it reduces blood sugar it can absorb cholesterol.

Note that soluble fiber works differently to the insoluble fiber you might be thinking about, which cleans your digestive tract and conversely to soluble fibers, speeds up digestion (although they still prolong satiety).

Glucomannan comes from the root of the Konjac plant, and is found in powdered extract form in many diet and weight loss pills and alongside fat burning compounds to exert an additive effect.

Glucomannan comes in the form of a powdered extract when it is added to supplements, taken from the root of the Konjac plant.

It is almost always used in capsule type diet pills because of its appetite suppressing effects, shown in large scale scientific studies.

In that respect, it’s rather simple. It dissolves in the stomach as a thick gel, a soft mass that both slows digestion and suppresses food cravings via hormone signalling.

The connection between the stomach biome and the brain are becoming more and more apparent with modern research, even giving rise to some scholars calling it the second brain.

As the stomach flora feed on the glucomannan, they signal that the stomach is full and the hunger is dialled down significantly. And yet, glucommanan adds nothing in terms of calories, thereby creating a calorie deficit without the pain of cravings.

After a while the gel like mass is fermented and passes comfortably through the intestine and…you can finish the sentence yourself.

Secondary to the direct appetite suppression, glucomannan may pull sugars from the bloodstream, lowering blood sugar levels and reducing the infamous spike-followed-by-crash of high carbohydrate foods.

For both of these reasons, glucomannan is best taken before a meal. It will reduce the amount you feel you need to eat and help regulate blood sugar levels.

How To Use Glucomannan

Glucomannan often comes as a standalone product – as Konjac Root or Glucomannan – in a time release capsule.

We’d recommend taking it as part of a multi-ingredient fat burner/diet pill though because there are additional benefits to take advantage of with the addition of thermogenic ingredients and other appetite suppressors. It should also be part of a larger diet and exercise plan (source).

Glucomannan should be taken about 30 minutes before a meal with a couple glasses of water to have the best effect. This will help you eat less in the meal and will help regulate blood sugar levels.

Always drink a lot of water with glucomannan as by nature it wants to absorb several hundred times its own weight in fluid.

The first supplements to contain this soluble fiber had about 500mg in the daily dose but we’ve seen that go up with time.

Now, it’s not uncommon to see 3000mg daily totals, but we wouldn’t take this much and not at one time.

Anywhere from 1000mg to 1500mg is a suitable daily dose, especially when taken in conjunction with other fat burning, appetite suppressing and carb blocking ingredients.

There aren’t any to be honest. It doesn’t interact with body chemistry so there can’t be any secondary effect.

The only thing to look out for is its ability to absorb liquid. That’s why we advise that you drink a lot of water when you take it.

Glucomannan featured in a kind of chewy candy/taffy in Asia for a while until it got stuck in people’s throats as it absorbed all the saliva and swelled up.

It’s completely safe if you take it in a pill with water.

As part of a healthy diet and exercise plan appetite suppression is one of the most effective methods to lose weight quickly.

It’s simpler for your body to reduce your overall calorie intake by simply not consuming the calories as opposed to burning the ones already there.