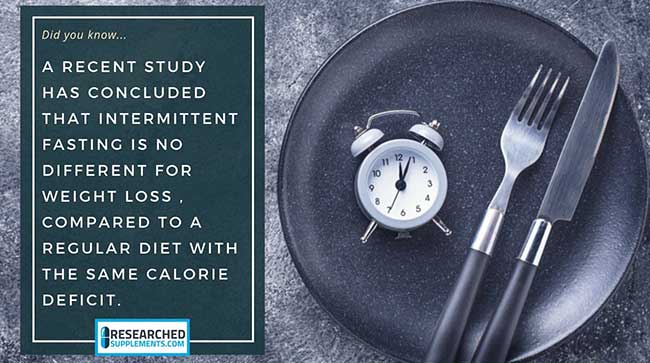 Intermittent Fasting (IF) has become a popular diet in recent years.

A recent year long study has concluded that Intermittent Fasting is no different for weight loss or heart health improvements, compared to a regular diet with the same calorie deficit.

Many proponents of the diet promote the idea that IF has additional advantages, in terms of weight loss and health benefits, over the simple energy balance dictum of calories in versus calories out (CICO).

Due to its popularity – much like that of Ketogenic dieting – it has become a marketable element in its own right. 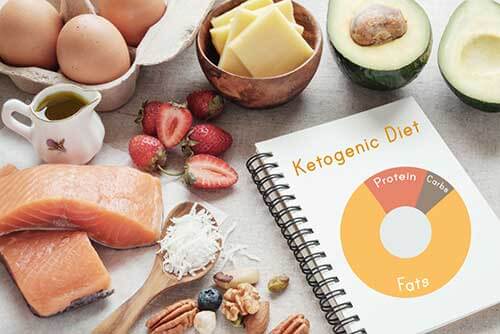 Scientific studies are the only controlled tests we can rely on to obtain hard data, where it otherwise appears that commerciality, popularity, gullibility and exaggeration might be the driving factors of the diet’s influence.

To that end, I’d like to discuss a recent study which compared Intermittent Fasting with what the study’s scientists call continuous dieting, the latter simply referring to a calorie deficit without any fasting breaks – i.e. a regular diet.

The study was one year long and involved obese subjects who had at least one additional component of metabolic syndrome.

The results show quite clearly that there was no apparent difference in improvements of weight loss, weight maintenance and cardiovascular risk factors over the course of the year.

In fact, the scientists highlighted that the only real difference between the two groups was the pronounced feelings of hunger in the IF group.

My aim is to explain the study in a little more detail, and explore the option of intermittent fasting from a neutral standpoint.

Furthermore, I’d like to provide some basis for your decision on what sort of dieting approach might suit your goals, while being manageable over the long-term. 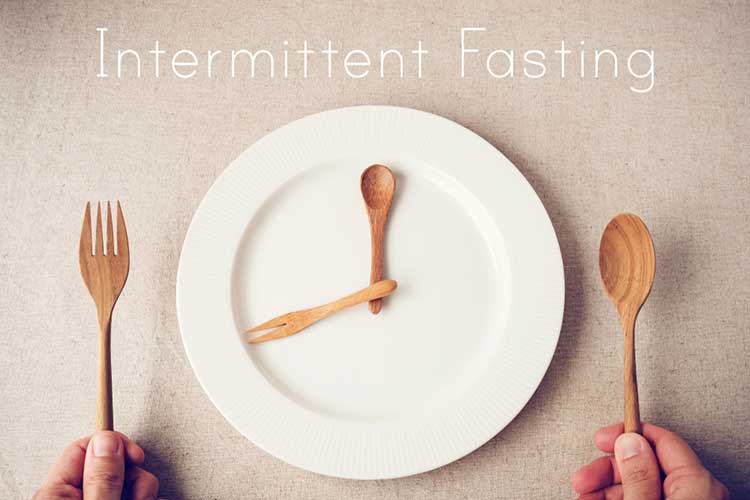 There are several variations of IF, but all types alternate periods of regular food consumption with extended (more than regular) periods of low, or no, food intake.

Fasting periods can be anywhere from 8 to 48 hours, but any lower than 8 and you’re flirting with the ‘normal’ crowd enough that the more adamant IFers will break up with you.

There’s no real set combination, in fact. People have done all sorts of things with varying degrees of success. A rule of thumb is that a fasting period involves skipping at least one regular main meal, and more likely two or more.

Here’s some common ones:

The original 5:2 diet idea involved eating normally for 5 days and fasting for 2. Some people would align this with the working week and the weekend.

Variations of the 5:2 follow the same general theme but might split the 2 days of fasting into two separate days.

Pretty simple really. Eat one day, fast the next. Of course this often means you are eating for 12 hours of the daytime and fasting overnight, the following day and one more night. So it’s more like 12:36.

Blocks of the 24 hour day are allocated to eating and fasting. Many people eat from some time mid-morning to late afternoon. That would be a feeding window.

Fasting windows don’t work if they are used as excuses for binge-fests in your feeding window. Again, it comes down to calories-in-calories-out but some clueless IFers think the fasting window is magical.

Another term you might see in research is Time Restricted Feeding (TRF), which is where the feeding window is restricted to less than 8 hours out of each 24 hour day. 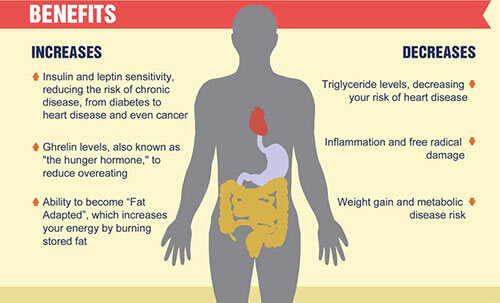 Benefits of Intermittent Fasting – the Real, Dubious and Entirely Made-Up

I’ll keep this section simple because in my opinion it should be kept that way. Overcomplicating the issue leads to two of the major problems with dieting philosophies, and those are hype and BS.

The real benefit of Intermittent Fasting is that it can help people lose weight/fat successfully. However, that must come with a rather large caveat.

IF only helps people lose weight if they find it easier to adhere to the eating schedule when compared with regular meal times. Furthermore, the overall calorie intake must be less than the calories required to maintain their current weight – i.e. a calorie deficit.

There are those who fit this description: IF works for them because they find it easier to stick to than anything else.

Other, more zealous proponents of IF believe there are additional metabolic benefits to their eating/fasting agenda over the regular ‘portion control’ approach to continuous dieting.

They discuss increased insulin sensitivity, fat adaptation and even life extension as benefits, the latter arising from some animal research concluding that possible preservation pathways and regenerative processes are stimulated by extended periods of fasting.

The truth is that while rats and mice are often good indicators of potential benefits to humans, they are nowhere near as complex. Also, they can be put through an IF protocol for their whole lives, and we have no idea how that translates to humans yet.

What’s more, there have been few studies that directly compare an IF diet with a regular one, which is why the recent study referenced above is of such value.

On the completely fabricated end of the scale, my example is one that can be applied to all of these fashionable diets.

They nearly all claim there is some extra fat burning power to them, and it’s nothing as easy as adherence to the calorie deficit.

True IF and Keto zealots believe there is something as yet undiscovered, or that is connected to insulin suppression, which causes the body to somehow reduce fat storage irrespective of calorie intake. 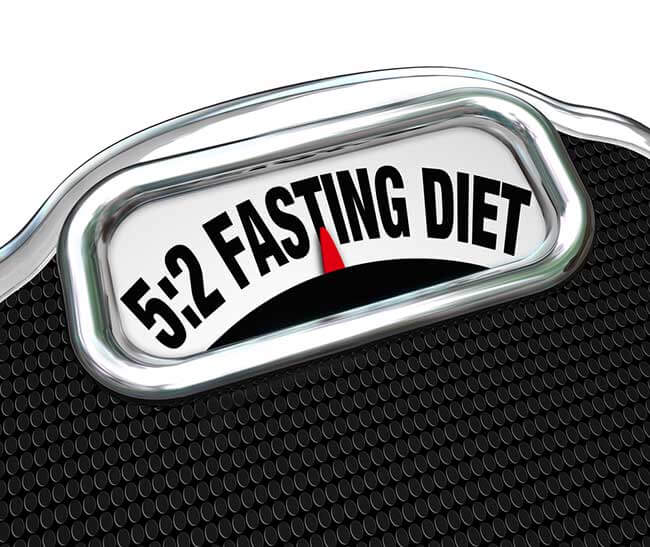 I suppose the main negative aspect of intermittent fasting is in the transition from regular dieting – at least for people who don’t have Type II diabetes or any metabolic syndrome. I’ll get to that issue in a minute.

This doesn’t happen for everyone of course but some people have a few uncomfortable effects while their bodies adjust. These can include:

Drinking enough water to be thoroughly hydrated is key, and it will help with all the other potential problems. 2 to 3 litres a day is a must.

Perhaps a more concerning factor is that which affects people who have impaired glycemic control, especially Type II diabetics.

The subjects fasted until midday – i.e. they missed breakfast – and only ate lunch and dinner. The scientists found that this fasting window actually increased postprandial hyperglycemia and impaired insulin response following the subjects’ lunch and dinner.

Basically, their blood sugar spiked more aggressively and their insulin responded with even less sensitivity than it does anyway.

Upshot: If you’re hyperglycemic, Type 2 or have any other form of metabolic syndrome, intermittent fasting is probably not for you.

The same can be said for pregnant women, teenagers and children under 18 and anyone who has or has had any form of eating disorder.

The 2018 Study Comparing IF with Continuous Dieting

This investigation involved over a hundred people, half men and half women between 21 and 70 years old.

They all had abdominal obesity and at least 1 additional component of metabolic syndrome.

The first 6 months was a weight loss phase and the second 6 months was a maintenance phase. The subjects were split into two groups randomly (equal on gender) and assigned either the IF protocol or the regular diet.

Both groups reduced calorie intake by 26-28% in the first 6 months.

Both groups lost roughly the same weight – 8 to 9 kg – and there were improvements in waist circumference, blood pressure, triglyceride levels, HDL cholesterol in both groups.

The IF group reported higher hunger levels during the study.

There’s quite a few strengths of this study:

This study is a whopper, if I’m being honest.

Besides being long, having loads of subjects and representing genders evenly, it looked at the health markers as well as weight loss.

I’m sure the hardcore IF crowd would have some response to the study design/interpretation/measurement protocol or whatever (they always do), but if you’re a reasonable person, you’ll be able to see the value of this study.

The even better news is that whichever diet you go for out of IF or plain old calorie deficit, neither appear to be any less viable than the other, and it again comes down to personal preference and consistent adherence.

What’s The Best Diet For You?

In my opinion, these diet labels – in this case, Intermittent Fasting – get in the way of the real objective.

How you go about achieving your weight loss goals should not be prescribed by someone else, unless they are a professional from whom you have asked advice.

Even then, their first instructions to you are an educated stab in the dark. In the end, it will come down to what you are most comfortable with, and able to adhere to. Consistency is extremely important with any kind of long-term physical and psychological endeavour.

Eat Less Than You Burn

And make no mistake, dieting for weight loss is a long-term physical and psychological endeavour.

Consistency is not necessarily a virtue driven by guts and determination. They might come into play now and then, but it’s more to do with your physical and mental capacity for the daily objective of eating less than you burn.

The “powering through” approach, by definition, is not sustainable. And you need a mindset geared towards sustainability and not one geared towards enduring a period of suffering.

Basically, whichever way is easiest – provided you are consuming adequate protein and making predominantly healthy food choices – is the way to go.

After all, you want this diet thing to disappear into the background so that you can enjoy life.

Success on the scale is pointless if you are perpetually hungry and miserable, because you will either abandon the process, or rebound after you make your goal weight and put it straight back on. 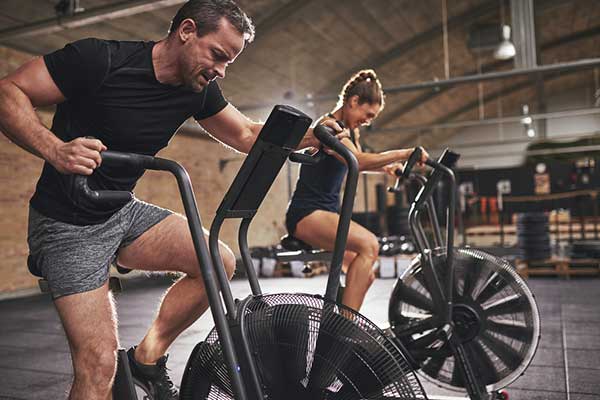 In fact, once you reach your goal weight, your next goal will likely be to maintain that weight, perhaps even improve your body composition even more with resistance training and cardio.

Or maybe you are already exercising while you lose weight.

Whatever you are doing to get there, it shouldn’t differ much to what you do from there on, except for the wonderful feeling of adding those deficit calories back in so that you can balance your energy in and energy out.

Therefore, again, it comes back to making the right choices for you.

Other people can help, for sure, but try not to let them influence you into thinking what worked for them must work for everyone.

One thing that you can be sure of, at least in the context of the current scientific body of evidence, is that Intermittent Fasting doesn’t have any magical benefits over a regular calorie counting approach to losing weight.

Calories In Calories Out

Some people need a concept to cling to – a schedule, a “feeding window” – and if it helps them reach their goal then that’s great.

If it helps you, then that’s great.

Have you tried a simple calorie counter/calculator though?If not, give that a try. There’s plenty of websites and apps. You can even use my article on high protein diets to calculate your numbers and the CICO article to understand the whole concept more clearly.

Figure out your daily calorie expenditure and calculate how much consumption you need to reduce and you might find it’s all you need to keep you on track.

Reachable targets and realistic goals are how things get done.