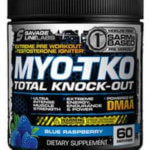 When I first saw a tub of MYO-TKO on the shelf at my supplement store, I was so surprised I nearly broke my jaw just gawping at the thing.

There were 8 letters on the front label that made me grab the thing instinctively and scuttle to the checkout, white-knuckling it so that no-one could take my precious away from me. (This product shouldn’t be confused with Instant Knockout)

From my cold dead hands, I say.

If that isn’t a true WTF moment, then I don’t know what is. Without asking too many questions, I left the shop and couldn’t wait to try MTO-TKO for my next session in the gym.

I won’t lie, I’m still confused as to what is going on with Savage Line Labs, and why they can sell products that include these ingredients, but I’m not a lawyer and to be honest I don’t really care. I’m just here for the gains!

Anyway, nothing was about to stop me using the product, if only because it would be one of the most interesting pre-workouts I’d get to review for a long time.

In case you’ve been sleeping under a rock for the last few years, DMAA and SARMs have been the focus of quite a lot of attention in the supplement industry.

Dimethylamylamine [source] – DMAA – is a dopamine boosting stimulant which, aside from anything else, is a banned substance in sports and commercial products in most countries that sell supps.

Several stimulants have since graced the shelves only to meet the same fate, usually at the hands of the FDA in the US, most notably:

SARMs [source] – otherwise known as Selective Androgen Receptor Modulators – are basically androgenic drugs which can be tuned to elicit specific effects in certain tissues, while refraining from triggering unwanted effects in others.

They are a kind of designer steroid in that their harmful side effects have been engineered out, hence the “selective” part.

Few have been identified as anabolic for muscle and bone growth, but the ones that do include ostarine (aka Enobosarm), which Savage Line Labs have included in MYO-TKO. 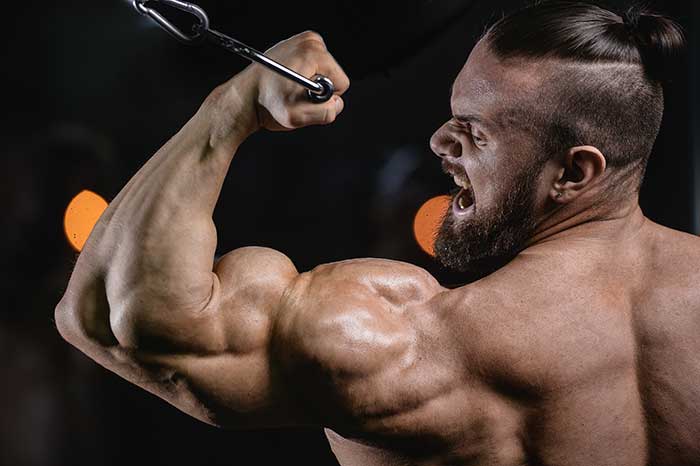 With this kind of pre-workout you have to realize that a lot of its value as a performance enhancer is riding on the DMAA and other stimulants.

Yes, it contains some other more mainstream ingredients but you won’t be writing home about those.

In fact, this product’s sales are going to be almost wholly reliant on customers copping the Ostarine and DMAA inclusions.

Now, DMAA is a performance enhancer, not just a mental booster. It’s one of the reasons it is loved by so many people.

Another reason for its popularity is that it lasts a long time. Due to its structure (it’s alpha-alkylated) it is protected from being broken down quickly and can exert its effects throughout an entire workout.

The stamina of DMAA means that it can stay bound to the dopamine receptor for longer. Dopamine being the ‘feel good’ catecholamine neurotransmitter, it means you can experience something close to euphoria after taking it.

The dopamine boost is a nice feeling – and it certainly helps in the gym from a cognition/focus perspective – but I mentioned earlier that DMAA doesn’t stop there. Again due to its structure it can play a part in a diverse spectrum of reactions in the body.

Long story short, DMAA can improve physical performance to a degree that not many other central nervous system stimulants can. Certainly none that are as easily obtainable as walking into your high street supplement store.

What about the SARM – Ostarine?

MK-2866 is its designation, though you might have heard of ostarine as being called Enobosarm, which is the leading brand name.

The androgenic effects of steroids are often what make them extremely potent, but it is also what can cause unwanted side effects, such as male pattern baldness and prostate issues.

SARMs, and their selective behaviour on different androgen receptors in the body means that they can bind to some receptors, e.g. for muscle growth and bone strength, while giving the prostate and scalp a wide berth.

So because they don’t act on all receptors in all bodily tissues the same, they are widely considered to be a lot safer.

The problem is that governments and such don’t see it this way. To agencies like the FDA, they are potentially harmful, and to WADA they are just another way to cheat. But like I said, those are not really my concern, and neither should they be yours unless you are, or plan to be, a competing athlete.

Unlike DMAA however, it’s difficult to tell whether the Ostarine in MYO-TKO is working for you. If you are someone who keeps track of your measurements and calories then perhaps you might be able to see the difference.

I have seen an anecdotal account from someone who asked Savage Line Labs for their lab transcripts to confirm that the SARMs were indeed genuine, and the company delivered on it.

There is also no reason to doubt that they are actually including Ostarine in the formula, at least no more than one can doubt every company as to whether the powder contains what’s on the label.

Ostarine was originally developed to treat osteoporosis and muscle wasting so it’s a logical choice of SARM for Savage Line Labs MYO-TKO.

Caffeine and Other Ingredients

Below I’ll list the ingredients as they appear on the Savage Line Labs MYO-TKO label. The company highlights the full-scoop (7.7g) and half-scoop (3.9g) dosages.

Here are the half-scoop dosages:

As you can see caffeine is included at 250mg for the half scoop dose, obviously making a full-scoop yield 500mg.

For me, that is the main limiting factor in taking a whole scoop. Half a gram of caffeine per day is widely considered to be the upper limit of a safe chronic dosage.

However, caffeine is not on its own, it is accompanied by DMAA, perhaps the most powerful commercial stimulant.

Higenamine is also in the formula at 25mg. It’s a stimulant which works in the same way ephedrine and synephrine does. It can be dosed similar to synephrine so it makes sense to include it at 25mg for the half scoop dose.

These three stimulants are the supplement’s main bite. Like I said, it’s hard to tell whether the ostarine will have an effect until a couple of tubs have been used up, but it’s certainly an interesting addition to the formula.

As for the Citrulline Malate, which should be the main pump ingredient, the dose is not strong enough at 1000 to 2000mg. Citrulline malate should be in the range of 6 to 10 grams to have good effect.

Even the beta alanine could be bumped up to at least 1600mg for the half scoop.

The caffeine prevents me from taking a full scoop, which in-turn reduces the dosages of all the other ingredients.

Changes I Would Make to the MYO-TKO Formula?

There’s a few things I’d tweak to improve this formula from one that sells on the basis of the stimulants and the ostarine to one that makes every inclusion work for the desired result.

Any changes below are relative to a full scoop of MYO-TKO:

If they wanted to be extra cool they could put L-Theanine in there at equal dosage to the caffeine to take the narly edge off the supplements and help the feel-good factor of the DMAA by triggering some alpha waves.

Given that DMAA most definitely works for performance enhancement and dopamine-boosted euphoria, it should definitely work for you (and for the record, a most certainly felt the same effects as what I remember dimethylamylamine being like).

The SARM aspect is a lot tricker to “feel” and I wouldn’t say there’s some huge surge of training aggression because of an increase in testosterone because that’s not how these things go. Ostarine is useful for targeting increased muscle and bone growth, without the usual side effects that come with other more infamous physique enhancing drugs.

The ostarine is just going to have to be one of those things you take on faith, although I’ve seen anecdotal evidence that Savage Line Labs release their lab reports to anyone who wants a look.

In summary, I’d love to try a 2.0 version of this supplement if they make a couple of changes to it, but I have to say I still really enjoyed this one.

MYO-TKO has it’s major uses of course, stimulants definitely help scrape you off the floor and get you to the gym if you’re having one of those days.

However, I’d like to have the muscle pump and another couple nutritional ingredients in there as well, rather than having to add a scoop of a non-stim pump formula. If nothing else, that gets stupidly expensive.

Savage Line Labs are bringing some heat though, and I for one will be truly interested to see where this company goes next.