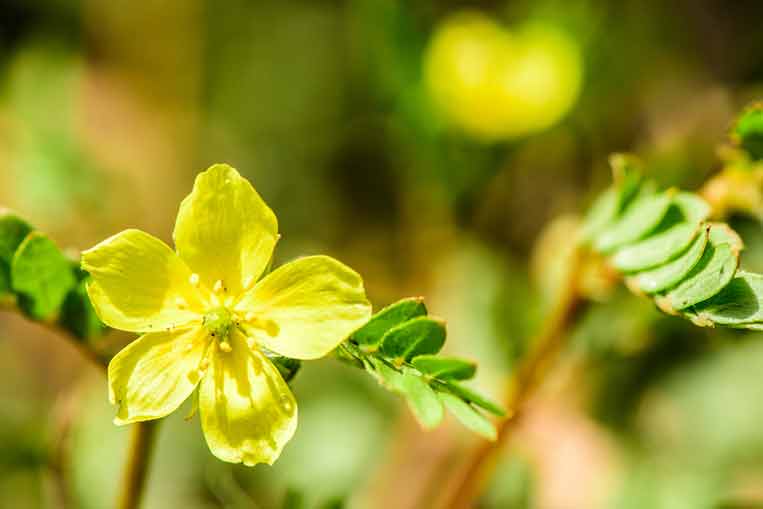 Tribulus terrestris is another herb used in traditional Ayurvedic medicine across the Indian sub-continent, where it has been historically, and still is, used as a male virility and vitality supplement.

Supplement manufacturers often market Tribulus as a testosterone booster but while it has plenty of supporting evidence for the libido boosting claims, there isn’t much to back up the testosterone benefit.

The fruit of the plant has additional benefits such as improving the health of vital organs, most notably the liver and kidneys.

Preliminary studies have highlighted a possible powerful benefit to the heart in one of the components of Tribulus called tribulosin.

It can also be lumped in to the adaptogen category due to its ability to reduce stress and the associated symptoms.

With respect to any beneficial effects on physical strength, muscle or exercise performance, there is not much corroborating research.

In contradiction to most studies, testosterone in those subjects was increased by just over 15% but it didn’t reach statistical significance.

There may be something to investigate further in terms of a correlation between men with low sperm counts and a mild testosterone increase from tribulus supplementation.

Sperm count and fertility measures were unchanged however, unlike a similar herb, Longjack, which is good for fertility enhancement.

It’s very early days yet with respect to scientific research in the context of heart health but a rat study shows that it can be cardioprotective, specifically from ischemia (shortage of blood/oxygen to heart) and reperfusion (damage caused by de-oxygenated blood).

The specific component is called tribulosin, which appears to work at very small doses for this purpose.

Rat studies again, this time with stressed rats, show that Tribulus can have an anti-stress/anti-depressant effect.

Herbs that have this effect are known as adaptogens. Other adaptogens of note include Ashwagandha, Rhodiola rosea and Panax Ginseng. It would be worthwhile looking into those for anxiolytic (anti-anxiety/anti-stress) effects as well as they work in much lower doses than tribulus.

Rats in pain, this time around – poor guys – and they showed in one study at least to have reduced response to pain when given tribulus.

The analgesic effect appears to reach potency that is greater than Aspirin but less than morphine.

How To Use Tribulus Terrestris

The herb will mostly be available to you in powdered extract form inside capsule supplements, either as part of a blend of other ingredients or on its own.

These products will be standardized and concentrated to provide the quantity of saponins. An average saponin content is 60% of the total extract weight.

Rat data gives us a pretty good idea that 5mg per kilogram of bodyweight is good for humans. That means for a 75kg person (165 lbs) you’re looking at a daily dose of 375mg of tribulus.

Traditionally the root powder and/or the fruits have been used in the order of 5 grams (5000mg) and 2 grams (2000mg) respectively, but apparently they taste like dirt, so just buy the pills and postpone the witchdoctor aspirations for a tastier supplement.

The above dosages should be fine for most people. If you have reduced kidney function for some reason then you should avoid Tribulus terrestris until more is known about whether it can increase renal toxicity slightly.

There is no cause for any real concern. Studies have not highlighted any other potential problems from supplementation.

It certainly seems like a promising supplement for protecting the heart and pain management, and its libido enhancing powers are in the bag (bad joke).

As for testosterone boosting, there are better supplements (like Boron and Coleus Forskohlii) and it is only really the companies that manufacture testosterone boosters that are holding on to tribulus being capable of it.

The risk of side effects are low, and it has a lot of empirical evidence to support this. If you have dodgy kidneys then give it a miss.

Otherwise, if you need to get your mojo going, Tribulus terrestris might be the herb for you.