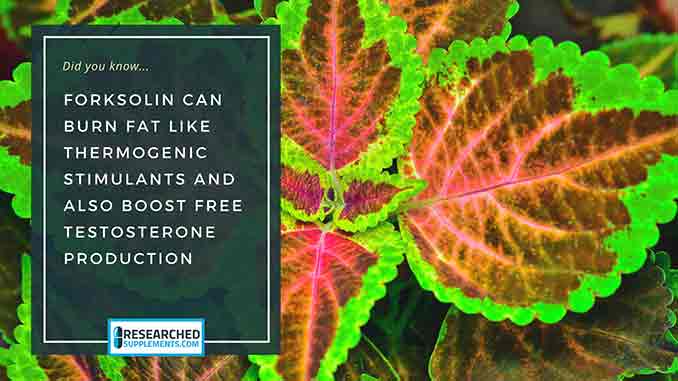 Coleus Forskohlii – What You Should Know

Forskolin is the principal bioactive compound in the herb Coleus Forskohlii and has been used in ancient medical practices across the asian continent and Indian sub-continent for many hundreds of years.

Coleus Forskohlii has generally been used by men during its history, mostly as a tonic for sexual health, vitality and subjective well-being.

The libido increase can come with a concomitant boost in testosterone levels when used correctly.

It is also a promising fat burner due to its ability to raise cyclic adenosine monophosphate (cAMP) levels in the blood.

In fact, the cAMP boost that forskolin triggers is responsible for many of the effects it has including reducing fat levels, increasing testosterone production and possibly building muscle both directly and indirectly (via the test boost).

There are other benefits, such as a reduction of asthma symptoms, an increase and bone mineral density and an improvement in cholesterol balance. A one trick pony, it is not.

It’s safe to use at the recommended dosages and can be present in supplements in both its parent coleus forskohlii forms.

Fifty miligrams, as it turns out, is a bold daily dose of forskolin and could be split into two separate servings of 25mg if possible. If not, perhaps split the supplement – whether it’s a fat burner, test booster or pre-workout – so that you are only getting 25mg in one hit to begin with.

Forskolin increases levels of cyclic adenosine monophosphate much like many of the better known stimulants on the market, including caffeine, synephrine and yohimbine.

Wherever cAMP gets to in the body, it has a positive effect in the context of several common requirements of a health supplement.

In the case of cAMP getting into fat cells, it purges them of triglycerides, which then allows them to be broken down into fatty acids and transported to mitochondrial cells to be burned for energy.

Again, like caffeine et al, the increase in cAMP in the male sexual organs can increase the production of testosterone, according to some research.

There needs to be more scientific studies in this area though. Single studies aren’t enough to get very excited about, but it’s well documented that cAMP in the testes boosts testosterone production so you can infer that there should be some at least with Forskolin.

Mostly, testosterone boosters that work in this way are useful for people who either have low testosterone to begin with, declining levels due to age, or for those who train a lot and therefore need theirs replenished.

We’d say the last option is the reason it’s a good supplement for the regular gym goer, bodybuilder or anyone who does intense exercise involving strength and resistance.

Research has kind of stalled in this area for some reason but Forskolin shows real promise in animal studies for improving muscle contraction strength and growth in response to training.

The pathways might include the testosterone increase but there appears to be an independent effect as well.

It’s worth taking for the other benefits alone but it’s likely to have some benefit to muscle, especially for the regular strength trainer.

Here’s one of the more significant effects of this compound. Bone mineral density was improved notably in one 12 week study involving male subjects.

Forskolin interacts with the same beta-2-adrenergic receptors as famous bronchial dilators like clenbuterol, and as such one of its primary effects is to increase lung capacity by opening up the bronchial tubes.

Theoretically, most cAMP boosters should have a similar effect but forskolin’s seems to be notable from the limited research so far.

Forskolin needs to be studied further but its positive effect on HDL – or good cholesterol – was remarkable.

It makes sense that forskolin/coleus forskohlii reduces fatigue because it acts in much the same way as stimulants do.

This effect has thus far been noted as a positive side effect to taking the herb in clinical trials, so a more dedicated study would be necessary to outright peg it as an anti-fatigue supplement.

How To Use Forskolin

It is often bundled alongside other ingredients which need or ought to be cycled anyway so it’s much easier to simply treat them all the same.

Forskolin is likely to come in diet pills and pre-workout supplements, as well as some testosterone boosters. If this is the case then make sure you start off by taking the minimum dose you can with a capsule supplement and something like a half scoop of a pre-workout.

Some desensitization has been noted during clinical trials, meaning prolonged usage will result in diminished effects. The 2 week off cycle should reset your tolerance.

When isolated as Forskolin, it’s best to stick to a 25mg to 50mg total daily dosage. If you are new to it and/or taking other stimulants in combination then you can take a half dose for the first couple of days and assess how you feel.

Armed with that you can calculate the dosage you are taking and adjust accordingly.

Luckily it has a high safety ceiling, meaning it takes a whole lot of it to do any real damage, but the limiting factor will be its effect on stomach acid levels and the associated discomfort before it becomes inherently dangerous.

If you suffer from issues with stomach acidity already then perhaps take it even easier on this supplement at first.

That said, there isn’t much point in taking anything greater than a 50mg total daily dose of isolated Forskolin (approx. 500mg dose of coleus forskohlii).

Our over-arching message with supplements is to start small on dosage and build from there, but don’t go over the recommended dose. And the same can be said with forskolin and its parent herb coleus forskohlii.

It’s a very promising supplement if used at the recommended dosages, and it comes with more benefits than your average cAMP booster.

The positive effects on bone mineral density alone should be enough for most bodybuilders and strength athletes to give forskolin a few cycles.

In addition to that you’ve got notable increases in bronchial dilation – hello cardio sports! And the HDL cholesterol thing is a winner for everyone.

Cycle it, dose it right and Forskolin will be a valuable addition to your supplement stack.