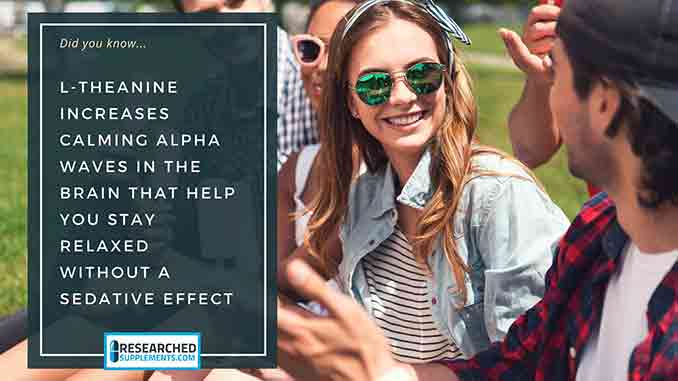 Theanine (or L-Theanine) is one of the underestimated rockstars of the supplement industry.

It’s a valuable sidekick to any stimulant, and a fairly potent stress reducer and relaxing agent (with no sedation) in its own right according to the research.

You will find this amino acid in many fat-burners, diet pills, pre-workout supplements and nootropic products (aka. smart pills/cognitive enhancers).

L-Theanine is the name you’ll see on most ingredient labels and it is most effective when paired with caffeine at a 1:1 ratio.

Caffeine and L-Theanine are one of the most useful synergistic pairs of compounds in the business.

It smooths out the stimulant spike of caffeine (and any other stimulant that can make you nervous or edgy), while improving on the stimulant’s benefits to focus, mental energy and cognitive function.

And it’s yet another treasure that’s been found in green tea, alongside the catechin molecules, including EGCG.

Aside from people who enjoy the overexcitement effect of potent stimulants, and like to feel jittery, or unsure whether they’re about to burst into tears or invent cold fusion, there is nobody who won’t benefit from a bit of L-Theanine in their life.

While not having direct fat burning properties like that of a thermogenic ingredient like caffeine, forskolin or yohimbine, this amino acid found in green tea is still helpful in the fight against fat.

That’s because Theanine improves the beneficial effects of stimulants, while reducing their negative effects.

It reduces stress and anxiety levels by triggering a release of alpha waves in the brain. This means it can also reduce the nervousness that stimulants can cause.

However, it does not reduce their overall effect at all, and in fact improve benefits to concentration and mental energy.

Another reason Theanine is great at this is because it does not induce any sedation. It relaxes you without making you drowsy.

The best way to describe it is the feeling of being “in the zone”. Calm but driven, that kind of thing.

If its taken without stimulants then you can still get the stress reduction and relaxation benefit.

For most people, the only negative point against stimulants is the nervousness, the jitters, the shakes, and so on. Theanine, when dosed correctly removes the problem.

In the context of fat loss it comes down to two main points:

Relaxation without sedation – sums it up pretty well.

L-Theanine is found in cognitive enhancers and nootropic supplements with or without caffeine and other stimulants because it can help you feel less stressed, without any effect on your energy levels.

In fact, given that tiredness is often due to mental fatigue more than anything, this is a supplement that will help you feel more awake at the same time as relaxed.

It could be considered a bona fide “chill pill”.

These effects are notable as well, meaning that in the scientific studies the subjects were well aware of the change in their state of mind, in addition to the measurements made by scientists with respect to alpha brain waves.

Theanine starts to kick in for relaxation about 30minutes to 1 hour after ingestion.

L-Theanine increases calming alpha waves in the brain that help you stay relaxed without a sedative effect. It also smooths out the edgy spike of stimulants like caffeine and actually improves their cognition boosting benefits. Click To Tweet

It’s a stretch to say that this amino acid helps you to build muscle, because it won’t, but much like it’s addition to fat burners containing stimulants, there’s an obvious advantage to doing the same with pre-workout supplements.

Again you will probably find caffeine and l-theanine in equal dose if you see them together in a pre-workout powder.

It might even be there in stim-free pre-workouts just because it can help you get dialled into your workout and focused on each lift within each set.

How To Use L-Theanine

If you split your dose of caffeine into two and take it before breakfast and before lunch (for example) then do the same with theanine.

You will more than likely be using a fat burner or pre-workout in this instance and so they will be in the same capsules anyway.

Remember that it works will with any stimulant, including synephrine. Of course the dosages don’t need to be matched in this case because synephrine is always present at much lower inclusion rates than caffeine would be.

In the event that you are not taking it with caffeine, you can use it at the 200mg dose mark.

The combination of caffeine and l-theanine is so good that you would have to be really against stimulants to not give it a go and enjoy it.

Scientific studies show that theanine is very safe indeed. The dosages you need for the beneficial effect are around 100mg to 200mg a day, and the safety limit is thousands of mg per kg of bodyweight.

Honestly, use it. And use it with caffeine if you want to make the most of it. See our caffeine article for information on cycling the stimulant and getting the best out of that.

A good starting point is to take 100mg of caffeine and 100mg l-theanine.

If you are into pre-workouts making you feel a rush from stimulants then you will still get that but with a greater effect on focus and less effect on the dirty jitters.