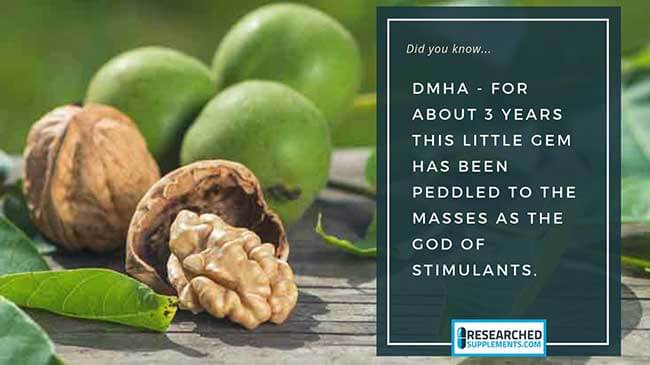 DMHA – What You Should Know

DMHA – For about 3 years this little gem has been peddled to the masses as the God of stimulants.

Dimethylhexylamine, abbreviated to DMHA, and also known under its brand name, Octodrine, is one of the latest central nervous system stimulants sweeping through the supplement industry.

Like most “next big thing” stimulants, this one is heavy on the marketing claims and light on scientific research.

Oddly enough though, it’s actually been around since the ‘50s when it was developed as a nasal decongestant.

If that rings bells for you then it’s probably because lots of infamous psychoactive stimulants were at some point labelled nasal decongestants (e.g. ephedrine) or bronchial dilators (e.g. clenbuterol hydrochloride).

These days, you’re likely to see bodybuilding supplement manufacturers label it as Juglans Regia, a naturally occurring source of DMHA. However, the synthetic DMHA is much cheaper to produce.

There’s always the obvious question as to whether it’s the synthetic drug or natural extract being used in the supplements.

The companies like it when there’s a natural source of these stimulants because it means they can argue semantics with the FDA for longer, and thus keep shifting the product (remember the DMAA – geranium kerfuffle?).

Structurally speaking, the natural and synthetic forms of DMHA are slightly different:

The different form should be noted on the label of the supplement you purchase, but like I said, regulating that is tricky.

What Does DMHA / Octodrine / Juglans Regia Do?

Octodrine is a psychoactive central nervous system stimulant, which is chemically similar to other stimulants which have already passed through the ergogenic and bodybuilding supplement industry.

Their (now) banned status (in the US and many other countries) should give you a good idea about the future of Octodrine / DMHA.

DMHA increases the uptake of the catecholamines Dopamine and Noradrenaline (norepinephrine), which are involved in the sympathetic nervous system – basically your ‘fight-or-flight’ instinct. 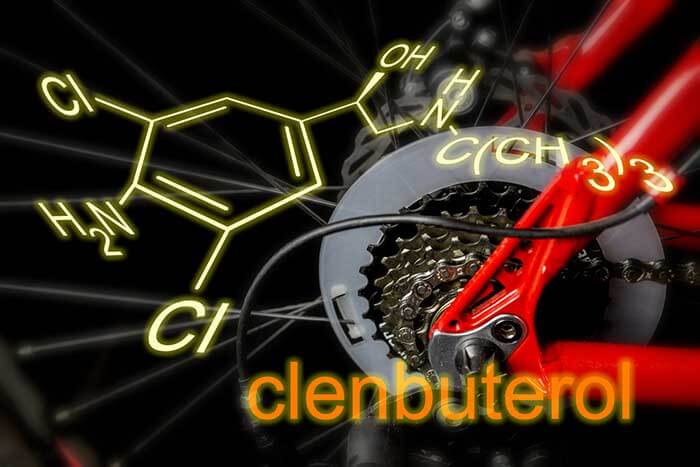 Stimulants that interact with this system are known as sympathomimetic amines. The controversial Clenbuterol Hydrochloride – aka ‘clen’ or ‘bute’ – is one such drug.

Also originally developed for asthmatics and later used for its highly stimulatory properties, clen is associated with a number of potentially harmful side effects.

That said, compounds such as synephrine (from Citrus aurantium / bitter orange) is technically a sympathomimetic, albeit a much milder and safer one.

Octodrine lies somewhere between the strength of the more extreme clenbuterol and the milder synephrine.

Reasons why people use octodrine supplements include:

Diet and weight loss pills, weight management supplements, and fat burners may also include it for its appetite suppression and lipolytic properties.

Anecdotal reports from users suggest people use it to be able to push through (effort) pain and fatigue that might otherwise stunt performance or shorten a workout.

What’s the Best Dosage of DMHA?

Again, it’s anecdotal at best but the likely optimal dosages for octodrine – when taken on its own – are as follows:

More precise reports recommend 1mg/kg of bodyweight up to a maximum of a 160mg dose. It’s probably wiser to follow the 1mg/kg rule without going above 100mg irrespective of bodyweight.

The recommended dose will vary from manufacturer to manufacturer and you will see varying amounts in their products.

Remember: stimulants like DMHA are stronger when taken alongside other stimulants. The additive effect means the dose should be dramatically reduced if other stimulants are present in the formula you are taking.

As with most stimulants, DMHA should definitely not be used within several hours of bedtime. Five to six hours ought to be enough time but individual responses differ.

For pre-workout supplements, users recommend taking DMHA-containing drinks between 15 and 60 minutes prior to exercising.

Most pre-workout products recommend taking them 15-30 minutes before working out but for some people it takes a little longer to kick in.

For weight loss and appetite suppression effects, people report taking the stimulant in between meals, within 60 minutes of eating. Again, this is not recommended before your evening meal.

What Are the Negative Side Effects of DMHA?

The main negative side effects that have been reported with DMHA use are unsurprisingly the same as those caused by most powerful stimulants:

Furthermore, long-term use can lead to increased tolerance, which might lead to dosing higher. Not a good way to bust the tolerance.

Besides, tolerance of stimulants tends to be built against the benefits rather than the negative side effects.

Essentially you might feel you need more to make it work for you in terms of focus and energy, but a higher dose may lead to worse side effects.

Long-term use may also lead to dependancy issues and/or withdrawal once you stop using it.

My Recommendations for Using DMHA

I’m not here to dissuade you from using this or that product, but I would be ignoring my responsibilities if I did not offer some advice.

There are a few major factors to consider when you are thinking of, or already, using a stimulant like DMHA.

There’s no need to take a full scoop of that pre-workout powder if you haven’t used DMHA already before and therefore already know your limits.

The beauty of a supplement like that is that you can assess how you feel with a quarter scoop on a rest day, then perhaps a half scoop and go from there.

Taking a full dose and following it with a gut-busting workout is asking for trouble.

On that note, don’t do a full-tilt workout the first exercise day you take it. The stimulant is already going to raise your heart rate and give you more energy, so hold back and let your ticker become accustomed to it.

Don’t Increase It – Cycle It

When using a stimulant to which the body can build a tolerance, it’s best to do it in cycles. A lot of people simply increase the dose when they no longer feel the benefits in order to defeat the tolerance, but that’s the wrong way to go about it. It’s asking for serious side effects.

Instead, you should use a stimulant for a pre-determined amount of time – 8 to 12 weeks is usually about the limit – and then gradually reduce your intake over the course of a few days to come off it with minimal withdrawal.

Once you have cycled off it, you can spend a week or two without any stimulants. This will reset your tolerance levels and you can start another cycle.

Remember: when you start a new cycle it’s much the same as starting for the first time and you should ease yourself into it again with quarter/half doses.

Stimulants aren’t All That

Pre-workout and dietary supplements that contain these stimulants are not hugely special, just because there is some controversy surrounding their use.

They cause controversy because of the potential for harm that they can cause, not the astounding benefits they give you. Use caffeine and synephrine correctly and they won’t be too far off the mark anyway.

If you ask most bodybuilders and strength athletes what they would prefer in their pre-workout and general supplement products, they are far more likely to discuss real nutritional ergogenic ingredients such as L-Citrulline, beta-Alanine, creatine and so on.

What Does the Future Hold for DMHA?

Most of us are waiting for the day that DMHA goes the way of its predecessors; DMAA, Ephedrine and AMP Citrate.

In other words it probably won’t be featuring in your favourite pre-workout and fat-burner brands come 2020.

For that not to be the case, what is definitely required is more scientific research. Current research is either decades old or involves animal data. Clinical trials with human subjects are severely lacking.

What’s more, there’s less literature on DMHA out there than some psychoactive stimulants that have long been banned. As I write this in 2018, WADA (World Anti-Doping Agency) prohibit the use of any stimulant in competition that has a similar structure to this one.

Suffice it to say, DMHA is going to get you banned from WADA monitored competitions.

Whatever name it appears under on your supplement label, rest assured that it is one of the more potent stimulants still currently in circulation.

If the majority of anecdotal reports are to be trusted then DMHA (Dimethlyhexylamine) is one of the more potent stimulants that exist this this legal limbo that has been discovered for a long time.

I say ‘discovered’ but really that happened nearly 70 years ago now, and its medical application long understood. The distinct lack of human data and any extensive study into the side effects of the drug should give you pause for thought.

The supplement industry, especially the sports bodybuilding ergogenic/performance enhancing sector is unregulated to say the least.

Yes, DMHA will likely be banned due to a some arbitrary number of incidents that have happened or have yet to happen. That’s just the way this system works.

Some countries place these stimulants on watch lists and banned substances lists but the US, ironically, is remarkably slow to act. And more often than not there is always something to take the place of a product when it’s in the process of getting banned.

I don’t doubt that the vast majority of people using DMHA will never have a serious problem with it. If you are considering using it, just use common sense and put any experimental urges aside. 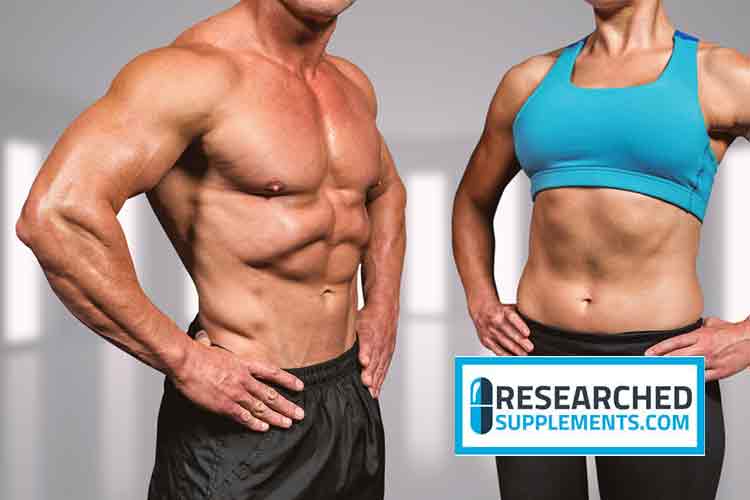