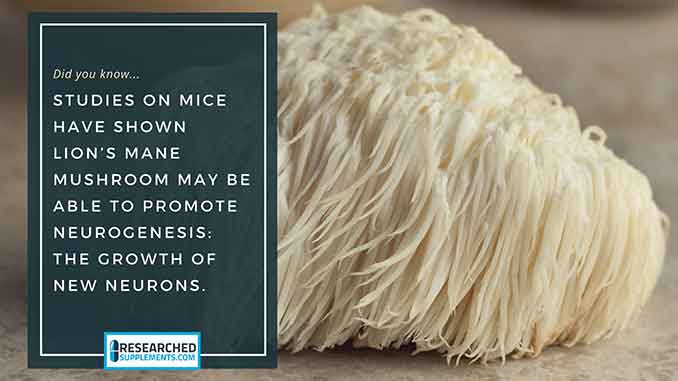 It goes by many names: Lion’s Mane, Monkey’s Head, Hedgehog Mushroom, Satyr’s Beard, but Yamabushitake is in fact an edible mushroom.

The mushroom can be refined into a supplement, which is used to enhance cognitive function as a standalone product or as part pf a multi-ingredient nootropic supplement.

Nootropic products, or “smart pills”, have gained popular attention in recent years, in part due to clever marketing strategies but also because many of their advertised benefits are being supported through solid scientific research.

People’s lives are changing as well. Information and distractions are everywhere, and attention spans are shorter as a result.

Students feel more and more pressure to succeed even as less and less opportunities seem available for graduates.

We could go on but we’re basically getting to the point that these products are in demand, and Yamabushitake extract is one of the more interesting ones.

Yamabushitake mushrooms are eaten in Japan and China.

The ethanolic extract of Lion’s Mane has been shown in clinical trials like the Koichiro Mori study to increase nerve growth factors.

Nerve growth factors are the precursors to the process of neurogenesis, i.e the growth of neurons. Neurogenesis was, at one time, not thought possible.

However animal studies carried out so far show that this supplement might be able to do that for us.

It has been demonstrated with human subjects that it can slow cognitive decline, reduce anxiety and have an anti-depressant benefit [https://www.ncbi.nlm.nih.gov/pubmed/20834180].

Yamabushitake is often tested with Panax Ginseng as they appear to act synergistically with one another.

This is a very preliminary finding but a study with mice concluded that the extract increased the expression of certain genes involved in fat burning processes.

How To Use Lion’s Mane Mushroom

The mushroom extract will often be part of a nootropic product formula containing multiple ingredients.

In this case it has to be taken alongside those other ingredients. Unfortunately, this type of supplement often means it will be under-dosed compared with empirical data of the effective quantity range.

Although a stand-alone Lion’s Mane supplement might be preferable, buying individual ingredient supplements can turn out to be expensive. There is often a compromise that one needs to arrive at with supplements, taking both cost and efficacy into account.

The human study tells us that between 3000mg per day is effective, although there is by no means a definitive answer on the optimal dosage.

The dose was split into three equal servings of 1000mg.

The supplemental dose described above is safe as far as the research goes.

There has been one case of a man in his sixties having to be treated for respiratory failure, and on inspection of the fluid from his lungs it appeared to be due to some reaction he had had to Yamabushitake he took months earlier.

Many people eat this mushroom in Asia with no reported side effects. It’s possible, as with any ingested compound, that some people will be allergic, or react in some way.

There is not much research with humans to go on. One study in fact. With that in mind, it’s difficult to draw a conclusion about Lion’s Mane – Yamabushitake – that has any weight to it.

Animal data tells us that it might promote neurogenesis, i.e. the growth of new nerve cells in the brain.

If that’s true then it needs to be investigated further, together with associated safety data to ensure it can be used confidently.

This is another example of a nootropic ingredient that shows promise but needs further investigation to be a sure success.

In the meantime, we recommend you read more about the adaptogen compounds like Ashwagandha, Rhodiola rosea and Bacopa monnieri.