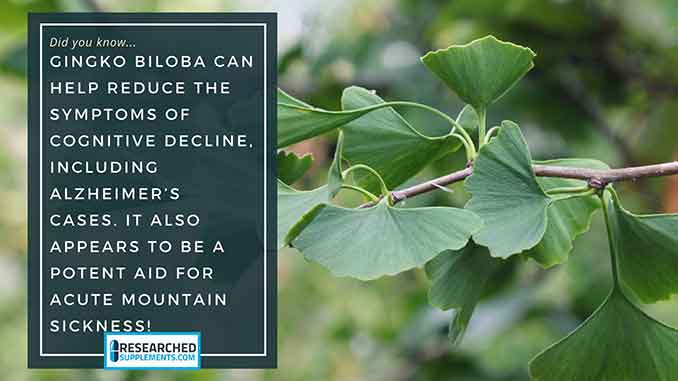 It’s always interesting to see how supplements that gain widespread attention and usage fair against the unemotional reality of scientific study.

With respect to boosting cognitive function, there are more powerful, and more proven herbs and other supplements available.

It looks to be more of a therapeutic herb for people already suffering from cognitive decline. In this it appears quite potent. As a booster for healthy people, it’s lacking the results.

Ginkgo does however possess some other qualities, again most beneficial to people who are suffering from some ailment or another. Nonetheless, worthy of closer inspection.

It’s the big studies, such as the one conducted with over 400 people, that demonstrate the efficacy of Gingko supplementation for people suffering with cognitive decline, especially related to Alzheimer’s.

The same studies have pretty much nailed down the dosage for this treatment (see dosage section below), and the specific type of extract – Bikbo Biloba EGb-761at a 50:1 concentration.

Memory, reaction time, processing speed appear to be improved in elderly people whether or not they have a degenerative disease, although the potency is less than the reduction of cognitive decline mentioned above.

There are small reductions of anxiety and stress noted with Gingko supplementation in people pre-disposed to anxiety. Further research must be conducted to confirm this.

Blood flow, including cerebral blood flow, is improved slightly, but any resulting benefits are mild. It doesn’t appear to be a powerful nitric oxide booster or vasodilator in its own right. Anyone looking for this effect should head to our Citrulline and Agmatine articles.

Overall, the studies of this herb appear to support its use as a treatment for cognitive decline that can be added to whatever additional therapy is being followed.

With respect to boosting a healthy mind, it does not appear to be the best option. Should you fall into this category, perhaps read our Alpha-GPC, Bacopa Monnieri, Ashwagandha and Rhodiola rosea articles and go from there.

This might not be the most common reason for taking a supplement but it’s worth mentioning here because Gingko appears to be particularly good at reducing the symptoms of acute mountain sickness.

So, if you’re going up a mountain any time soon, you should probably take it in the week leading up to your…expedition.

How To Use Ginkgo Bilioba

It should be taken with food.

The extract to look for is called Bikbo Biloba EGb 761 and it will be a 50:1 concentration.

The only reliable results have come from studies involving a large number of people suffering from cognitive decline.

It can improve cognitive function for healthy people but it’s quite unreliable and there are better supplement options in any case.

Phosphatidylserine and Panax Ginseng both to be synergistic with Gingko Biloba, and Bacopa monnieri is being investigated in this context as well.

The dose of the extract above should be between 120mg – 240mg per day for average users, but elderly people will get some benefit from about 60mg to 120mg.

One of the compounds cam interfere with blood platelet activation and so has been associated with subdural hematomas. Of course, this can also have a positive effect when used by people for heart health reasons who actually want the effect.

There appears to be a minor increase in breast cancer risk in elderly people if Gingko is taken for about 6 years.

It’s not bad for cognitive function, but it’s not the best either. It might be more use as a therapy for people with cognitive decline than a booster, but it does appear to behave synergistically with other compounds, so there’s that.

The breast cancer risk is low and it has only been reported in people 75 years or older who have been taking the supplement daily for 6 years.

If you are a mountain climber who suffers from acute mountain sickness, or you are scaling something large for the first time in the near future, it appears you are quids in with Gingko Biloba.

If you are looking for a cognitive boost, and are healthy, you can probably find something better. There’s links throughout this page to our articles on those supplements.